Help me to project a new light on Marseilles, european capital of culture in 2013, through the look of 13 foreigners living there. 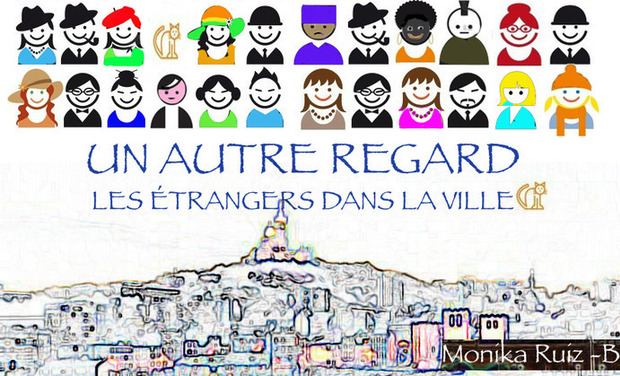 The them of the foreigner, widely and banally commented lately, continues to rise the same questions:

The foreigner can not be dissociated from the city, "he or she is the one who is different, who is not from the homeland... but who progressively settle ". Without strangers the city does not exist. The city is the place where one comes from somewhere else. As time goes by, the city is getting richer  from the differences of the individuals who compose it. Marseille is the perfect example. It has fed itself from its communities, it is the result of fluxes which have modeled its image as a cosmopolitan city.

But does one really know its foreigners? Could we have another look on them and try to put an end to these sticky and vivid clichés?

I am a foreigner. Born in Colombia, I lived successively in Latin America, United States, then in France. I have been living in Marseille since 2003.

To present thirteen portraits. Thirteen men or women which have stopped one day in this city, have adopted it and stayed in it to fulfill one self. Beyond these faces, they are thirteen professional and personal course which are presented, thirteen Marseilles from thirteen different countries, invested in the life of their city.   It is to grasp these persons beyond their political or financial status,  as individuals on their own with their story and their will to build a life elsewhere than their native country .     This attachment to Marseilles, I intend to visualize it by giving each of them the opportunity to choose the place where they want to be pictured. What is the place, the monument, the neighborhood...  of Marseilles they want to be associated with? and why? Eventually, by taking a picture of this person and this place we have access to his or her memory. By delivering us his or her choice out, the person opens up his or her memory to us, a fragment of memory at a given instant. A fleeting moment which could constitute an indelible mark, captured by the photographer, if the time itself was not modifying this recording itself.  Because the time perpetually  changes the perception of our memory in the permanent flux of our existence.

Since I left Colombia in 1983, I have embarked on a long journey which still goes on today. Since this time, my camera never leaves me. I bring it with me wherever I go, whether it  is through Latin America, Europe, or United States. It has become an essential mean of communication which I used to express my feelings, my thoughts, my fears, and my worries. I photograph only the things which  interest me, touch me, enthusiasm me or revolt me.

My photographic work is very anchored on to the portrait, I feel concerned by the temper and psychology of the human being. Through the portrait I multiply the attempts of exploring the human interiority without being sure however to succeed in diving into the intricacies of the human spirit, or to translate plastically what is revealed to me and which makes sense. I often think about this thought from Giacometti: " Never will I be able to put in a portrait all the strength he has in a head. The only fact of living, already imposes such a will, such an energy". My photographic work is focused on this search to become, if possible, the artistic théâtralisation of my own internal sensations, the intimacy of my experiences, of my relationship to the visible world.

My pictures also reflect my personal commitment, my opinion. They shall be perceived as an act of participation and denunciation rather than as an act of pure recording. Of course with time my eye has refined, I believe, and my work, which is essentially a testimony about the world we live in, also comes along with an aesthetic search where the art of framing and compositions plays an increasing role.

If this project does interest you, you can contribute to its realization.

This collect will be used to finance the costs of printing, editing, and framing the photographic work in order to present it at several institutions: - organizations working with foreigners living in France (OMI, Maison de l'Etranger,…) - places where foreigners do arrive in France (Marignane airport, Saint Charles train station, La Joliette maritime station) - galleries and festivals.

I also would like to offer the thirteen persons who collaborated with me to perform this project their Fine-Art portrait, the book of the exhibition: "Another look. The foreigners in the city", as well as the book by italian writer Italo Calvino: "Invisibles cities".

The total budget of the project is 3630 euros. I invest  some of my own money, and I try to get through this collect an additional sum of 3000 Euros.