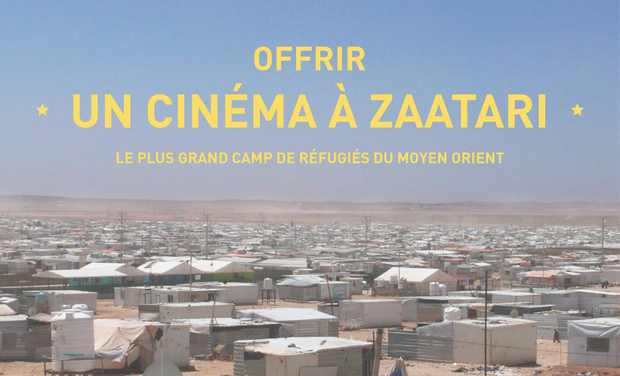 North of Jordan, about 10 km from the Syrian border, is one of the largest refugee camp in the world : AL ZAATARI camp.

80.000 refugees live today in this camp, men, women, children who fled the war in Syria. They left everything behind and live in makeshift facilities in the middle of the desert.

The camp is administrated by United Nation’s UNHCR.

Some of the refugees arrived five years ago. Since then, a few schools have been set up, as well as hospitals, and even a main street which the refugees have baptized “Champs Elysées” with its small shops and stalls. Life goes on, while people wait for the war to end.

As a group of film-makers, we entered the camp during a film shoot. What we saw there moved us deeply and we felt compelled to do something.

There are already schools, hospitals, a complex organization for food, hygiene and basic necessities. Indeed, the NGOs are doing an outstanding job.

So we came up with the idea of bringing the refugees a small cinema. It will show movies dubbed in Arabic so that both children and adults can enjoy carefree moments.

We like the idea that films could bring some happiness to this suffering population, help them discover other cultures, and create social bonds.

We have spoken to the UNHCR, and with the refugees themselves. They've all welcomed our initiative.

Today, we are raising funds to buy the equipment needed and build a cinema, in the middle of the desert, as an answer to the violence, the madness of this world.

We have created a non-profit association which we called “LUMIERE”, as a tribute to the Lumière brothers, the french inventors of cinema.

We’ve asked the refugees to bring together a small group of people that will look after the cinema, maintain the equipment and schedule the screenings. Our call was answered with enthusiasm.

Details of the projet :

We aim to inaugurate the movie theatre by the end of 2017!

The cinema will be set up in a very large tent that can seat up to 150 people (UNHCR advises against larger gatherings). There are many such tents already in the camp.

IRD (International Relief and Development), a NGO working under the supervision of our partners the UNHCR at the management of a centre for arts and culture in Zaatari, will provide us with such a tent. We will then adapt and decorate it to turn it into a movie theatre. The tent they are offering us is ideally located in the heart of the camp, in district 2.

The audience will be able to sit on chairs or carpets, as they prefer.

On the pediment of the tent will be written in lights السينما LUMIERE (CINEMA LUMIERE), in French and Arabic. This sign will be made by a crew of Jordanian movie technicians specialising in construction, with whom we’ve already established contact.

Inside the tent, we’ll try to recreate the feel of a projection room.

Frames will be set up around the screen to conceal the loudspeakers. The sides of the tent will be decorated with oblique hangings, to create an acoustic environment. The aim is to offer the refugees a break from their everyday settings, by turning a tent from a purely functional administrative building into a realistic projection room.

- A simple but powerful video projector that anyone can use, and that can project on a screen 5 or 6 metres long.

- A screen, custom-made by a Jordanian crew from a professional material hung on a metal frame, whose size and proportion will depend on the tent.

- An inflatable screen for outdoor night-time screenings, if the camp authorities feel they can be organised.

- A DVD/Blu-Ray player connected to the video projector.

- A sound system bringing the audio to 3 loudspeakers on stands, one on each side of the screen and one in the middle.

- Flight cases in which to store the DVD player and amplifier. They will be piled up high enough to enable the video projector, set up on top of them, to project its light beam over the crowd. The whole installation should be easy to move if necessary.

- Extra lamps for the video projector.

For the first screening, as a symbolic gesture, we’d like to show the refugees Workers leaving the Lumière factory and other movies by the original inventors, with a commentary in Arabic about the invention of cinema.

Afterwards, features and animations from all around the world should be shown, always dubbed in Arabic.

The films will have to meet certain requirements so as not to offend the audience’s religious convictions (no sex, violence, etc.).

We will also try to collaborate with the camp schools to screen films in accordance with the children’s educational programs, such as documentaries.

And why not even screen football games broadcast online, allowing the refugees to watch them all together.

We will be asking major French and international distribution companies for free access to their film catalogues, from which the managers of the cinema can make their pick.

The choice of films will be a delicate matter, in which we will be assisted by the Royal Film Commission (the state organisation coordinating the movie industry in Jordan), as well as our partners in Amman and in Al Zaatari.

Volunteers from "Lumière à Zaatari" will buy and ship the equipment to Jordan, with the help of a local team of volunteers as well as local authorities, who should facilitate this “humanitarian” transaction with customs.

The same French and Jordanian volunteers will set up and decorate the cinema, with the help of UNHCR and IRD. They will then hire and train a projectionist and two other people from among the camp refugees, who will be paid to run the movie theatre.

The fund-raising will help us:

If we reach 38.000€, our first goal will be reached: the cinema will be fully operational and able to host its audience!

But this is only the first step.

If we raise 50.000€, we'll be able to pay the wages of a part-time coordinator and technical manager for a full year, to help run the cinema and take charge of the programming and screening.

Beyond 50.000€, the funds will help us pay for the operational costs of the cinema beyond its first year of activity.

If the donations exceed 60.000€, we will be able to pay for the cinema's operational costs for the first two years of activity, and we will donate the extra money to "LES ECRANS DE LA PAIX" (“SCREENS FOR PEACE”), an association which has been going around the refugee camps in the Middle East for years with an itinerant cinema.

The people living in Zaatari will probably still be there in a year. Their cinema mustn’t stop.

Thanks a lot! Contributors will be able to follow the project's advancement and day-to-day operations thanks to our photo and video journal, on the association's facebook page. YOUR DONATION IS TAX DEDUCTIBLE!

Thank you so, so much! Contributors will be able to follow the project's advancement and day-to-day operations thanks to our photo and video journal, on the association's facebook page. YOUR DONATION IS TAX DEDUCTIBLE!

Thank you very VERY MUCH! And of course once again contributors will be able to follow the project's advancement and day-to-day operations thanks to our photo and video journal, on the association's facebook page. YOUR DONATION IS TAX DEDUCTIBLE!

THANKS A MILLION!!! Contributors will, of course, be able to follow the project's advancement and day-to-day operations thanks to our photo and video journal, on the association's facebook page. DON'T FORGET : YOUR DONATION IS TAX DEDUCTIBLE!