Reach for the stars | Contribute to the lengthening of our Via Ferrata, a sport halfway between hiking and climbing!

A mountain, a cliff and a great amount of ambition, this is what it took for Hugo, Stéphane and Philippe to realize this crazy project of a mountain adventure park: Tyroparc.

Tyroparc offers mega ziplines and a Via ferrata. The longest zipline of almost one kilometer is the star of the park! The Via Ferrata is not to be outdone: being a mix between hiking and climbing, the wall is climbed with the help of metal rungs and steel cables.

Tyropark is first of all a story about people , the meeting of some guys and girls from different backgrounds. Both in terms of geography and training. The team is made up of people from Quebec, but also from Europe, France, Scandinavia , but also from the Pacific region with New Zealand and New Caledonia, not to mention Central America, Ecuador. The Tyroparc family is above all, the unity, cohesion and love of the trade they ply. Accompanying you to help you push your limits. Knowing how to coach you throughout your activity or your day is their main motivation. A team of enthusiasts.

The park has been in operation for four years now. Their first guests were their family, friends and locals. Now the park welcomes customers from all over the world, from Mexico to China!

One project at a time, the three allies increase the scope of Tyroparc. This summer it is the extension of the Via Ferrata which is planned. The goal: that it voyages along the entire cliff, 400 meters of cables!

** The park is open year-round, summer and winter, not to mention the magical colors of autumn! Purchased counterparties may be used at any time if time permits. The new Via Ferrata should be installed by September 2017!

The cost of the completion of the new Via Ferrata course is estimated at $ 130,000! The funds raised during the socio-financing campaign will therefore contribute in part to the purchase of the equipment and the construction of the Via Ferrata! 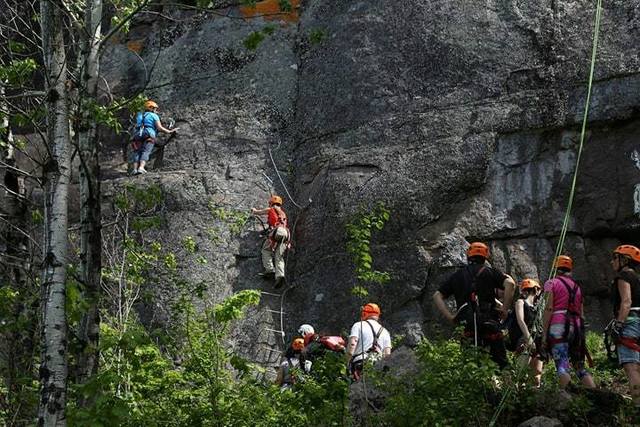 Are you a company? Leave your mark on our new course! A section of Via Ferrata will take the name of your company with a plaque installed for one year ! You will not soon be forgotten, promise!