Help Designing Hope offering underprivileged children in southern Africa a new school uniform to support them in their education. 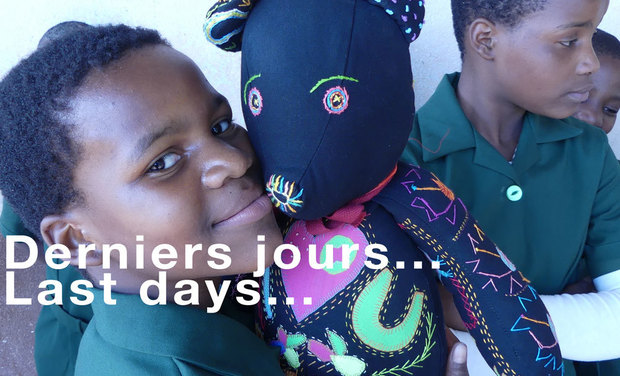 Designing Hope has a 13 years field experience in these three countries. Southern Africa is indeed one of the HIV & AIDS most affected areas in the world. The situation is improving, especially through better distribution of treatment, but many people died in the last 2 decades, and AIDS orphans are very numerous. This project is dedicated to these vulnerable children.

They are very vulnerable children. They are supported by their extended families that often can not afford to properly fund their education. In fact,  the school system in Southern Africa is very expensive for families, who must take charge of tuition, books and school uniform, which is mandatory.

Therefore these children often wear second hand uniforms that they get from an older brother, sister or cousin, and that is torn, patched or not even repairable at all. Uniform, that is supposed to eliminate social differences among children, has an opposite effect. These children are rejected by others because of their appearance, at an age when children are very tough toward each others.

Our aim is to produce 490 school uniforms with your support!

We divided this crowdfunding into 3 steps, associated to geographical areas covered by the project:

50 will be for these children, and 50 others to children living around the center, that we can not accommodate due to lack of space.

3rd step: 12250 euros Distribution of 30 additional uniforms for a school in Chitungwiza, a suburb of Harare, capital of Zimbabwe.

And if your generosity allows ...

We will use the excess funds to add sweaters for girls and boys, because  winters are very cold, and support more children during the year, the need is HUGE! ...

Designing Hope launched this school uniform distribution project in 2011 with a support group of HIV-positive women in Swaziland who are also beneficiaries of the project.

Designing Hope organized a professional training in sewing for these women, and supplied them with professional sewing machines and patterns for each tunic model.

They can supply locally the uniforms in the colors and sizes needed for children identified in each partner school. They have already made more than 1,500 uniforms in recent years, and this activity gives them an income and an a valuable professional experience.

We launch this fundraiser on Kiss kiss bank bank to dress children for beginning of 2017.

Rewards offered to donors are objects with a real meaning, and that are also manufactured in Southern Africa.

This project has a real impact on the lives of these children: it help them regain their dignity and actually encourage them in their studies.

Thank you in advance for your generosity!

Throughout Southern Africa, education is modeled on the English system. Children attending school must all wear the uniform bearing the school's embroidered emblem and respecting the school's specific colors.

The distribution of these uniforms is very moving for beneficiary children

The collection will be used to provide 490 uniforms:   - 360 to 12 schools in Swaziland - 100 for a shelter for day Roosbom orphaned, in Kwazulu Natal, South Africa - 30 for a school on the outskirts of Harare, Zimbabwe's capital.   The price of the full uniform can vary slightly depending on the child's age, gender, and school because each school has its own rules. It may also vary depending on the course of the local currency (South African rand), on which is indexed Swazi currency, which is very volatile. Here are the indicative prices at which we buy uniforms for children from 12 to 16:   -Tuniques For girls: 18 € This price includes the fabric, its delivery, and sewing is done by an association of HIV-positive women in the city Piggs Peak and the embroidered school logo.   - White shirt: 4,5 €   - Boy Pants: 6 €   - Sweater with embroidered school logo: 7 €   - shoes: 7 €   - Tie: € 1

With a tunic and shoes for girls, and shirt & tie, pants, sweater and shoes for boys, we have an average of 25 euros per child for a full uniform.

Postcard format 15x21 - photographer Laurence Leblanc, edited for Designing Hope. Visual made with the children of the Half Way House of Roosboom, managed by the association in South Africa. Girls and boys in the picture wear their schooluniform ...

Keyring "We Are One" Heart made with beads and wire in South Africa, with ribbon hand embroidered in Swaziland with a heart.

An original children's drawing. self-portrait by beneficiary children in their school uniforms.

1 flower in designed by Christian Louboutin for Designing Hope and made of beads and wire in South Africa. (3 colors available, that can choose when picked up at the association in Paris (contact us for a delivery).

Set of 10 postcards Format 15x21 - photographer Laurence Leblanc, edited for Designing Hope. Visual made with the children of the Half Way House of Roosboom, managed by the association in South Africa. Girls and boys in the picture wear their school uniforms ...

Embroidered Bear made in South Africa (Cape Province - Forward Association Group) Sewn and embroidered entirely by hand. large model: 45cm To pick up at the association in Paris (Contact us for a delivery).

Embroidered Bear made in South Africa (Cape Province - Forward Association Group) Sewn and embroidered entirely by hand. XL model: 60cm To be picked up at the association in Paris (Contact us for a delivery).

Embroidered poem on frame, made in Swaziland. Several texts available, made during a past project with french NGO "Le Printemps des Poètes" They can be chosen on the following link: http://artists4life.org/le-fil-des-mots/

Poem embroidered by hand, mounted on frame, made in Swaziland from the graphic designs of artists and fashion designers. Limited to 8 copies, made during a past project with the NGO "Printemps des Poètes". 15 embroidered paintings available in various formats between 30x40 and 50x60cm. Designed can be booked by order of registration of the donors. They can be chosen on the following link: http://artists4life.org/le-fil-des-mots/