Participate in the production of the next reggae record of Vibeguard Recordings label: Power Tong Riddim 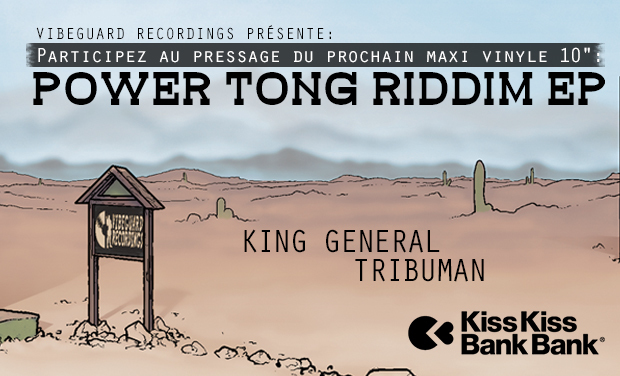 LISTEN THE FOUR RECORDS ON SOUNDCLOUD :

♬For this new project, Vibeguard still connects France to the UK by overseeing all from the Champagne!

It honors one of England’s most respected artists and appreciated the UK’s reggae scene: King General. This guest give the song « Inna This Time » with a multifaceted style on a stepper riddim created by Cedrik aka The Green Chapel Doctor and chased by the trumpet Tribuman, peerless musician from Strasbourg that is also found in microphone on « Don’t Stop The Music ».

♬Vibeguard wishes immortalize these two songs on an EP format 10" which will be added an instrumental version with a saxophone and a Dub straight out of the Studio Wise.

♬The visual signed by Dave Thomson to which we have the cover of the digital single  Mista Collie Man or  VGR7004 record label.

♬This format Ep 10 « Power Tong Riddim should be pressed in limited 300 copies to the delight of fans of reggae and vinyl!

With your help, we hope to carry out this project we have had a lot of fun to work with. We need your strength and your support to make it happen !!   Talk about it around you, share it, twitt it, Facebook it will already be for us the best way forward.   Also we hope that the counterparts that we have prepared will resonate in your dreams!

The crowdfunding will be used to finance the production of vinyl record:

♬Mix of the tunes at Wise Studio à Ris-Orangis: 600€

Be many to support us !!