Contribute to the production of the 2nd album of Vital Breath : after the single "Welcome to my world", participate in the full album's release. 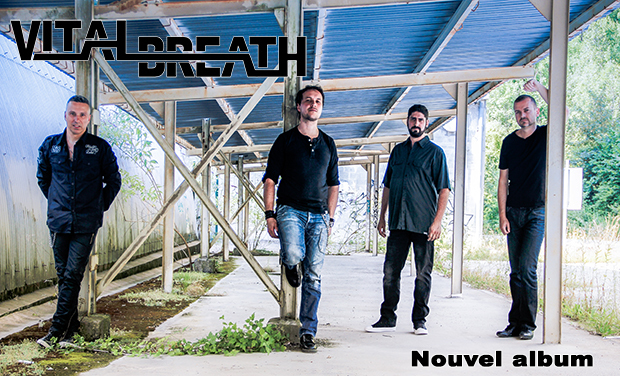 The band has taken part in important shows in France and also in Belgium at the PPM Fest, where Vital Breath shared the stage with Queensryche, Helloween, Gamma Ray, Firewind.

International and national press gave a broad positive coverage as is shown in our Press Book.

At the beginning of 2015, the band started to work on new titles for the second album. Meanwhile a first single "Welcome to my world" released in June 2015 on digital distribution Zimbalam with his video .

Year 2016, a change of line up with  Wayne Loeuillet (guitar) and Christophe Blanc-Tailleur (bass guitar).

Vital Breath starts the realisation on the second album with a motivated, strong and determinated team.

The band  started the recordings during 2016's summer with his soundman Olivier Didillon , he 's in charge of the mix and the mastering of the album, at Record 'Did studio in Monistrol / Loire (42 - Loire - France).

A part of the financial resources to concretize the project is missing.

The rich and valuable exchanges we had with you during our concerts and on our Facebook page, give us hope you'll also be actors and investigators in this new adventure.

Then we'll have the great pleasure to mention your names as contributors in the new album cover.

For the time being, as appetiser before the release of our second album, these are pre-production samples.

We're really excited and we look forward to introduce you the full album.  We already have been approached by labels interested by Vital Breath (in Denmark, Germany and the United States), and like you, they're waiting the full album with impatience.

Many thanks in advance!

We haven't included the promotion cost, it stays chargeable to the group and to our private partners.

For information, a minimum standard package for a specialised promotion agency cost 1200 € on average, and can rise to 5000 € and more, depending on targets and networks chosen.

Goodies : 1 magnet or 1 badge Vital Breath and a your name in the next album cover.

Same as previous + new CD album dedicated The first thirty contributors of this pack will receive a bonus cap.

Same as previous + invitation to an exclusive preview of the new album with all the band in Lyon.

Same as previous + invitation to a rehearsal of the band in Lyon..

same as previous + 2h greet and meet with one member of the band in Lyon.

Private show in Lyon or in your place ( free charges around Lyon or Geneva + T-Shirt Vital Breath + new CD album dedicated + goodies and a your name in the next album cover.

Become a muse for Vital Breath and participate to the creation of a song especially for you. You will follow the creation process all along (music, lyrics ...) +T-Shirt Vital Breath + new CD album dedicated, goodies and a your name in the next album cover..