Support the growth of the first real Pan-European party and make people believe in Politics again. 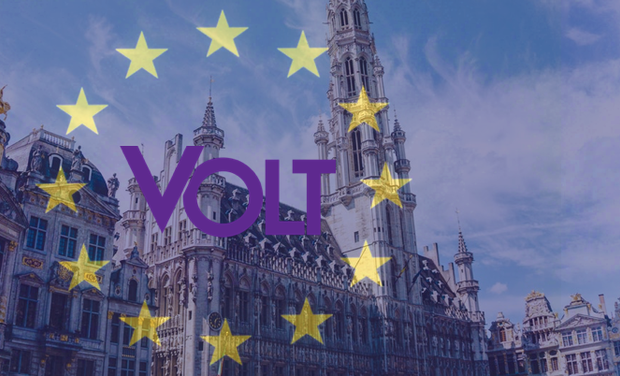 <p>WHY VOLT?&nbsp;&nbsp;&nbsp;<img alt="" src="https://d3v4jsc54141g1.cloudfront.net/uploads/project_image/image/534885/volt_campaining-1533731800.jpg" width="100%" /></p> <p>Does the European project also appeal to you? Do you, however, think that the political and democratic management of the European Union must be improved? Are you convinced that Europe is the level of power that can provide effective answers to the challenges of economic and technological globalization, the instability of certain regions in the world or the enormous ecological challenges our planet is facing?&nbsp;</p> <p>&nbsp;&nbsp;</p> <p>This is also the faith of the Volt movement. Unlike those who advocate withdrawal, we believe that Europe is our best hope. It is one of the best levels to develop policies whose impacts are sustainable&nbsp;and relevant for&nbsp;the daily lives of all citizens. Volt is growing today as a political force in Belgium and Europe thanks to a team of highly motivated volunteers. Our General Assembly in July 2018 drew the attention of the media. A significant proportion of the population in Wallonia, Brussels and Flanders regrets the rise of extremes across Europe. We notice this every day. At the same time, citizens are tired of the inability of traditional political parties to look beyond their self-interest. People need a positive alternative, an alternative that offers new perspectives, effective solutions, based on the context of today and not on yesterday&#39;s recipes. Volt wants to build this political alternative with your help around a robust pro-European project that fights for social inclusion, justice, smart governance and sustainable development.&nbsp;</p> <p>&nbsp;&nbsp;</p> <p>On 29 March 2017, when article 50 was activated and Brexit started, the Volt team created its first Facebook page and started challenging the status quo. Since then we have grown exponentially and local groups have been established in 30 countries.&nbsp;</p> <p><img alt="" src="https://d3v4jsc54141g1.cloudfront.net/uploads/project_image/image/534890/volt_map-1533732312.jpg" width="100%" />&nbsp;&nbsp;</p> <p>WHO IS VOLT BELGIUM?&nbsp;</p> <p>Volt Belgium is the Belgian branch of Volt Europe, a new pan-European progressive movement that wants to defend an inclusive new way of doing politics. We are a heterogeneous group of people with different backgrounds, whether or not they are involved in professional life. We can count on a growing number of experts in various fields. Volt Belgium is present in all three regions. We share both love for our country and a deep affection for the continent we belong to. We are disappointed about the way in which the institutions of the European Union function. At the same time, we are convinced that European citizens can join forces, use their efforts and their energy to change and improve the way politics is done at the level of the European institutions.&nbsp;</p> <p>&nbsp;&nbsp;</p> <p>Meet the Belgian team from Volt.&nbsp;&nbsp;&nbsp;<img alt="" src="https://d3v4jsc54141g1.cloudfront.net/uploads/project_image/image/534888/volt_team_goed-1533731893.png" width="100%" /></p> <p>We would also like to introduce you specifically, from left to right, to Jean-Yves, Marcela and Arno. During the general assembly, they were elected with a huge majority of the votes by the Volt members and now they work day and night to prepare our group for the elections. Arno and Jean-Yves became our co-presidents and Marcela was elected as our treasurer.&nbsp;</p> <p><img alt="" src="https://d3v4jsc54141g1.cloudfront.net/uploads/project_image/image/534889/volt_3-1533732069.jpg" width="100%" /></p> <p>Check out our website and discover the first articles published about us:&nbsp;</p> <p><a href="https://www.voltbelgie.org/" target="_blank">https://www.voltbelgie.org/</a>&nbsp;</p> <p><a href="http://www.standaard.be/cnt/dmf20180727_03634950" target="_blank">http://www.standaard.be/cnt/dmf20180727_03634950</a>&nbsp;</p> <p><a href="http://www.lalibre.be/actu/international/volt-ce-mouvement-politique-qui-veut-revolutionner-l-europe-5b5c25df553269254856fd4d" target="_blank">http://www.lalibre.be/actu/international/volt-ce-mouvement-politique-qui-veut-revolutionner-l-europe-5b5c25df553269254856fd4d</a>&nbsp;</p> <p>&nbsp;</p> <p>WHY SHOULD YOU&nbsp;SUPPORT VOLT BELGIUM FINANCIALLY?&nbsp;&nbsp;&nbsp;</p> <p>Volt Belgium is growing fast. We already have local teams in all three regions of the country. The number of cities in which we operate is increasing weekly. This development shows the hunger of Walloon, Brussels and Flemish citizens for a positive proposal regarding the European project. A proposal that makes it possible to act at the right level to ensure a truly positive effect on our daily lives. To strengthen the movement, we need new human resources. That is why we seek your support through this crowdfunding campaign. Let us work together to make our voices be heard on all political levels in which Volt Belgium wants to participate.&nbsp;</p> <p>&nbsp;&nbsp;</p> <p>The next two months will be very important for Volt Belgium. The movement will participate in its first elections, by presenting lists in a series of Brussels municipalities, during the municipal elections of 14 October. Later we will also participate in the upcoming regional, federal and European elections in May 2019.&nbsp;</p> <p>&nbsp;&nbsp;</p> <p>Your support will enable us to present our message and proposals to a larger number of Belgian voters. In this way we want&nbsp;to introduce a&nbsp;breathe&nbsp;of fresh air and&nbsp;a different vision through the democratic landscape of our country.&nbsp;</p> <p><img alt="" src="https://d3v4jsc54141g1.cloudfront.net/uploads/project_image/image/535174/Volt_volt-1533829964.jpg" width="100%" /></p>

Thank you for your support! You will receive a personalised thank you email from one of our Belgian volunteers in any European Language you prefer. ;)

Thank you for your support! You will receive a beautiful Volt T-shirt in your size + a personalised thank you email from one of our Belgian volunteers in any European Language you prefer. ;)

Than you for your support! You will receive a printed version of our policy priorities for Belgium + a beautiful Volt T-shirt in your size + a personalised thank you email from one of our Belgian volunteers in any European Language you prefer. ;)

Thank you for your support! You are invited to a delicious dinner or lunch with a member of the Belgian Volt political leadership in Brussels. Be ready for some nice wining and dining and intense debate about the EU + all previous awards