Help us to edit the first portfolio, printed 300 copies dedicated to Giuseppe Rava : Waterloo, on the battlefield. 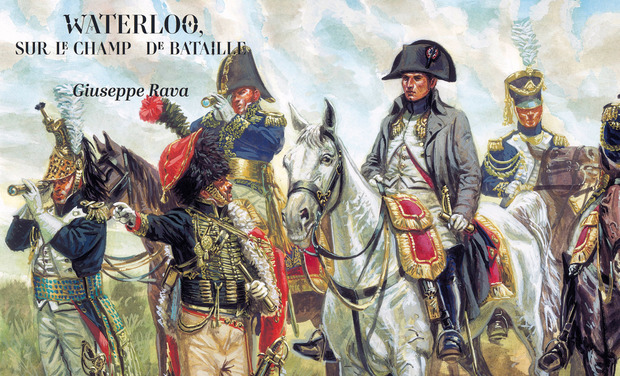 Le Studio des 8 trésors is an agency specializing in historical iconographic research and negotiating image rights for advertising. For several months we were thinking to explore other worlds in connection with our business: a collection of portfolio bringing together the best military illustrators. On the occasion of the bicentenary of the Battle of Waterloo, help us to launch the first portfolio of military illustrators offered by Le Studio des 8 trésors

On the occasion of the Bicentenary of the Battle of Waterloo, help us to finance the first portfolio of military illustrators proposed by the Studio des 8 Trésors.

Waterloo, on the battle field by Giuseppe Rava

Detailed presentation of the plan.

Halfway between comic strip and illustration, military illustrators are the heirs of a long pictorial tradition. If the genre paintings have almost disappeared, many other mediums use their talent : specialized press, publishing houses, model or figurine producers. And since a few years, they take part in the success of video games by producing artwork and graphic atmosphere.

Giuseppe Rava belongs to this sphere of influence. He ranks among the main illustrators thanks to the narrative strength and the stylishness of his pictures. Beyond reproach on an historical point of view, never caught out considering the details, he works regularly for Osprey publishing, Guerres et Histoire, Vae Victis…

It seems natural and obvious to us to start our collection of portfolios by a set dedicated to the Napoleonic epic and most particularly, the Battle of Waterloo. Since many years, Giuseppe travels all over the battle fields of the First Empire and brings back snapshots relating without bias the heroism and violence of the wars that put their mark on Europe’s memory.

The portfolio produced by the Studio des 8 Trésors are collector’s items due to the care given to their creation (paper selection, printing, graphics) and the quality of the artists who accepted to collaborate with us. World War II air force and air-battles will be the themes of the second portfolio, followed by 12 new pictures of Antiquity wars by Giuseppe Rava at the end of the year.

This first portfolio will be composed of 12 pictures printed in high definition on Splendorgel 270g paper, collected in a blue Keaycolor 340g paper envelope. The 15 pictures will come with a text written by Thierry Lentz, president of the Napoleon Foundation and a biography of the author. Graphics will be created by Lola Duval (http://www.loladuval.com). This publication is produced in partnership with the magazine Science et Vie/Guerres et Histoire.

280 copies of this first volume, numbered from 1 to 280, will be printed, as well as 20 copies signed by the author and numbered from I to XX. 12 visions de la bataille de Waterloo

Portrait of french emperor Napoleon I and his staff

Wellington and Blücher with staff

Soldiers of the belgian and dutch artillery shooting with gun

Charge of the 15th regiment of british dragoons

Cavalry regiment of the British Army

The imperial gard during battle

The Grande armee pushed into corner

If this are exceeded, the surplus will fund the second portfolio of Giuseppe Rava devoted to the military history of antiquity.