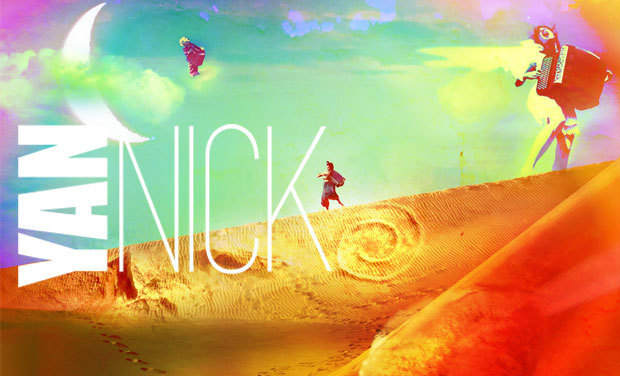 On the ways of the Bohemia, hemet a Congolese, Solo Sita and  SOS Watondo who will allow him to discover finally the stage. He will occur in Holland with his Darbuka.   Arrived in the Caribbean, he is going to meet Cubans, Inhabitants of Guadeloupe then to integrate Toccata into Martinique with his ukulele.

The accordion appeared three years ago when it arrives in Colombia by sailboat. He will form a French-Argentine duet, Gringo Loco, with Luciano Astori, guitarist.   They will make the tour of South America during 2 years, by playing in streets, buses, bars, hostels, boats and some festivals. They will burn their disk, Gringo Loco, « El camino of Bohemia « in the studios of Bogotá, and in the hostel rooms with their portable microphone.   Yannick autooccurs in the graphic realization, the editing of his videos as well as in the recording of her record.

After this long travelling, Yannick brings in in France, and cheek for the first time in its country, France. The magic works but still shy, he decides to leave to Canaria islands where he will meet Male, a percussionist and a player of Senegalese kora. The French-Senegalese duet will bring a new sound, which is again going to enrich its musical education and its journeys.

Finally only Thailand, where he will become aware of his energy, of his strength, its voice of its passion and love that he sends in the face of his public. And this public who he dismissal its gratitude much to his surprise. So he will learn to become a magician.   Today he is going to measure finally his country, the World !

The STAGE, that why i need your help !

€ 500 for the turner / Manager ( MdmProd on Paris ) € 400 for the talks accordion € 200 for costumes € 600 equipment ( amplifier , microphone , Foot, Cables ) € 300 for travel and look for a maximum contract ( bus , train, accommodation )   All this to finally make you travel as much as possible in my world ... for good accordionist ringing in your ears .   My first date will be May 6 at the festival " Tournai accordion " in Belgium !! Then the dates should enchainer !   So with these 2000 euros , the dream just continue , and sharing grow! the funds will be paid into a special account to one day become ... intermittent entertainment !!