Turn clay into bronze, make sculpture more than a hobby, transform dreams into reality… Yes, we can! 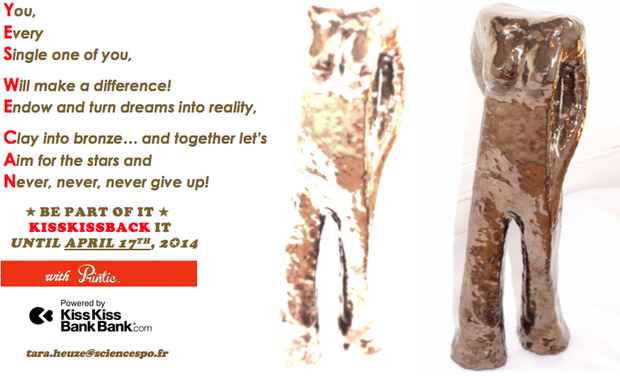 Yes, we can! Project, story, challenge

June 30th, 2008. Barack Obama’s campaign is raging. His motto makes a deep impression on every one of us. This Yes, we can! particularly stroke a chord with me as I had just been accepted to the prestigious Lycée Henri IV. This was a dream coming true, and the excitement of this big news was so great that when I announced it that very night at my sculpture workshop I broke the piece I was working on. Symbolically speaking, I could not stand to see this statue looking like a disarticulated puppet, embodying a lost momentum, when in itself it was supposed to be synonymous with a far-sighted project, a technical prowess, a new step in my art. As soon as I would repair it, it would break again. Once, twice… Ready to start all over again if the third attempt had not been fruitful. I had an intuition in which nobody trusted – not even my teacher – but which was correct in the end. It is therefore to celebrate an historic political event, but also the determination, obstinacy and motivation materialised in the sculpture that I have decided to call it Yes, we can!

Facts about Yes, we can!

- made out of chamotte black clay, a kind of granular clay preventing the object to explode during baking

- enamelled in “auré” brown, the colour giving it a shimmering/bronze aspect

When I broke Yes, we can! it fell on its arm, the one behind the back. It’s that part and this movement in particular that were difficult to reproduce… but whose suppleness I was finally able to achieve again, beyond my expectations.

March, 23rd 2013. Vernissage of my first exhibition. Most importantly, it is the occasion to gather many people dear to my heart before I leave for Russia at the end of the summer. I am about to take this big leap in the context of SciencesPo’s exchange programme, and I have chosen Moscow for its setting. It is no coincidence that I have selected the exuberant capital for an once-in-a-lifetime experience, to simply Move On like the name of my exhibition suggested. It is no coincidence either that it was Yes, we can! featuring on the invitations. When visiting Moscow shortly before, I was hypnotized by its liveliness, energy and dynamism: I was under the spell of this unstoppable city. On every level: political, economic, artistic. During my vernissage, as I was getting more and more offers, I fully grasped that my sculptures could mean many things to many people and not only to me… I fully grasped that they could be more than a hobby.  Besides, I had heard that the Tsars’ smelters’ knowhow was perpetuated from generation to generation to present day, and that I could easily get an introduction to the modern craftsmen… I did not need more to be convinced that Yes, we can! would be travelling with me.  The idea to make some bronzes out of this statue, already of that colour, had taken root a while ago, but it really blossomed when some kind acquaintances offered to display them in their own galleries. This was how I left towards new adventures with 60 kg of luggage and my head bursting with plans.

February 3rd, 2014. Answer from Cambridge. I’m offered a place at my first-choice University and programme. However, this offer is conditional, notably on me being able to afford the fees associated with studying in one of the best universities in the world. I could not dream of a better occasion to combine passion and reason and finally throw myself into this big challenge: go for the gold thanks to the bronze. Yes, we can! For some I’m talented, for others deserving, but for all I need to prove I am able to find the means to achieve my goals. It’s what I aim for right now with (and thanks to) you.

Right now. If you’ve come thus far, you have probably understood how you could contribute to the project: I turn towards kisskissbackers to finance the first bronzes I would make from Yes, we can! whose sales will help me fund my studies at Cambridge. As you probably do not know, bronze is expensive even in Russia, so to make this project happen I would need approximately 1000€ for each workpiece. In the meantime I hope to make at least five of them, numbered, and I therefore set my collection target at 6000€. It would also cover the cost of delivery to the various galleries if, to my delight, the transport issue gets raised.

By backing this project, you could potentially launch an artist’s career, but you will surely give a twenteenager the opportunity to make one of her dreams come true and to continue to shoot for the moon though it might mean landing in the stars (O. Wilde)

What if the collection target is outreached? Then, I will blissfully make some more bronzes!

And by the way, another reason to support my project is to do just like Printic®. This young French startup which makes your memories real by printing the pictures on your smartphone and sending them for free all around the world, also helps me to make my dreams come true!

huge thanks, sparkles in my eyes

huge thanks, sparkles in my eyes and personalised Printic® pictures of Yes, we can!

huge thanks, sparkles in my eyes, personalised Printic® pictures of Yes, we can! and a personalised signed badge (“oui art cool” or “we are cool”)

huge thanks, sparkles in my eyes, personalised Printic® pictures of Yes, we can!, two personalised signed badge (“oui art cool” and “we are cool”) and a preview of my works

huge thanks, sparkles in my eyes, personalised Printic® pictures of Yes, we can!, one of the badges and one lesson in the Parisian workshop where everything started

huge thanks, sparkles in my eyes, personalised Printic® pictures of Yes, we can!, one of the badges and a painting of mine

huge thanks, sparkles in my eyes, personalised Printic® pictures of Yes, we can!, one of the badges and a sculpture of mine