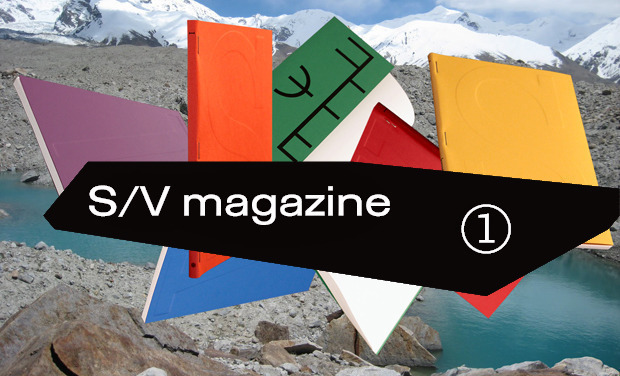 <p> 1&mdash;A creative, literary, contemporary magazine</p> <p> &nbsp;</p> <p> S/V magazine is an international magazine that is published thrice a year. It is published in both print format and online. It focuses on contemporary writing practices, in a constant dialog with the evolution of form in writing. It is open to texts that blur the boundaries between genres and media (photography, drawing, performance, and so on).</p> <p> S/V magazine has, at its core, a wish to be open and attentive to contemporary creation; that&#39;s why it supports young writers in particular and wishes to stimulate a dialog with creators. It also seeks to create a link between individuals in the literary world and readers. The S/V team has thus already met the famous Mexican author Yuri Herrera for an interview that will be published in the first issue. This interview is the core, the center of the magazine. It is conducted by the editors&#39; team and will find echoes in a series of original creations (in fiction and non-fiction, both creative and critical).&nbsp;</p> <p> &nbsp;</p> <p> 2&mdash;A double publishing space: the importance of online publishing</p> <p> &nbsp;</p> <p> S/V magazine occupies various publishing platforms: the print format finds its continuation in an electronic version that will allow for a better distribution abroad. What&#39;s more, since our focus is on contemporary creation of any kind, creations based on sound, image, and any other kind of media, will thus be published with each issue in a specific part of the magazine&#39;s website.</p> <p> &nbsp;</p> <p> 3&mdash;Committing to an international, multilingual basis</p> <p> &nbsp;</p> <p> S/V magazine speaks French, Spanish, and English, and has always in mind the delicate question of switching from one language to the other, with all the enriching confrontation this implies. It welcomes all creative practices as well as all languages, without any distinction (mainly French, English, Spanish, Germand, Portuguese, and Italian - submissions in any other language will be published along with a translation in one of these six European languages). It also brings to light multilingual writing practices. S/V&#39;s international team will be working on most of these translations, in a constant dialog with the writers.&nbsp;</p> <p> &nbsp;</p> <p> 4&mdash;Formal layout</p> <p> &nbsp;</p> <p> S/V uses the universal code of a four-mast ship. The magazine has for frame the image of a ship that would be perpetually just about to take off to the open sea. While it is docked, its holds would be full of novel, unprecedented content that would create dialog during the journey.</p> <p> &nbsp;</p> <p> S/V&#39;s waterline has three levels :</p> <p> &ndash; original creations &amp; translations</p> <p> &ndash; interviews and free-form portraits</p> <p> &ndash; critical reviews of recent publications, performances, etc.</p> <p> &nbsp;</p> <p> The visual aspect is the fourth component of the magazine. S/V wishes to create a real formal dialogue between various text-based and artistic practices. To this end, each issue will highlight the work of an artist, in close collaboration with the team&#39;s graphic designers and curators.&nbsp;</p>