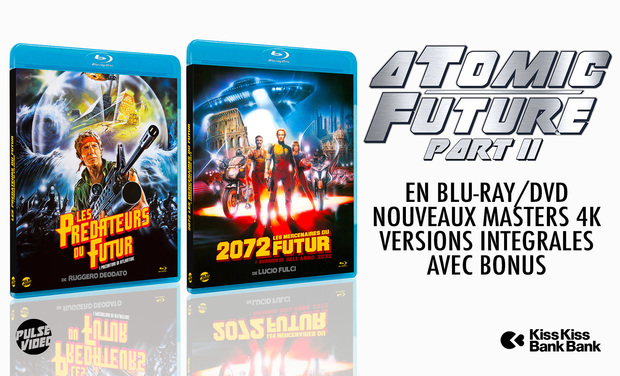 In 2020, the Apocalypse did happen! Now that we’re in it deep, it’s time to rediscover tow masterpieces of the Italian “post-nuke” genre, for the first time even in high definition, from brand new 4K integral full-length masters, in blu-ray and DVD combos, with plenty of extras. Les Prédateurs de l'Atlantide aka I Predatori di Atlantide aka Atlantis Interceptors (1983) by cult director Ruggero Deodato (Cannibal Holocaust!), and 2072 Les Mercenaires du futur aka 2072 A.D. The New Gladiators by master of horror Lucio Fulci, for his one and only take on the post-apocalyptic genre. To make it happen, we need you : if we don’t gather at least 500 backers, these blu-ray/DVD won’t be released. Make the Armageddon Great Again!

Last year, we invited exploitation cinema lovers to participate to a crazy adventure: give to Hands of Steel (1987), directed by Sergio Martino, and Exterminators of the Year 3000 (1983), directed by Giuliano Carmineo, the blu-ray/DVD releases that these two gems from Italian B-cinema deserves. Today, we come back to you with two films even more expected. For many months, we have been preparing this project, with StudioCanal who owns the films, and the publishers which will release these in the US and in Germany.

Here we are with Atlantis Interceptors (1983) by Ruggero Deodato and 2072 A.D. The New Gladiators / Warriors of the Year 2072 (1984) by Lucio Fulci. Finally restored, presented to you in new pristine 4K masters in full-length versions.

We might even upgrade our edition to 4K UHD if we gather 1000 backers. UHD discs costs way more the “regular” blu-rays, and as much we would love to offer your UltraHD, it can only be possible if we reach the 1000 subscriptions. If this happen, the UHD disc would be added at no charge for every backer.

After creating a scandal with his gore masterpiece Cannibal Holocaust, Ruggero Deodato turns himself to the new fashionable genre: post-apocalyptic cinema. Simultenously an adventure film, a non-stop action flick and a science-fiction movie, Atlantis Interceptors is one of the most appreciated of all Mad Mad lookalikes, and a fun and spectacular manifest of the Italian craftsmanship for exploitation cinema. You must have seen Atlantis Interceptors before the world ends!

Unblocked at 750 backers : “Art of the Apocalypse”, a short documentary about the poster art for post-apocalyptic films, with interviews by artists Renato Casaro and Enzo Sciotti

Welcome to year 2072, in a society fascinated by violence. To entertain the crowd, the rulers of Rom reinvented the arena games. The new gladiators are now gathered in front of the television cameras. Between post-apocalyptic and dystopia, between Mad Max and Running Man, Warriors of the Year 2072 allows the great Lucio Fulci to extend his repertoire. Cheesy costumes, futuristic glitter and social critic are combined together, in a film than deserves to be rediscovered within the career of its famous director.

As for every campaign, every backer will get our new set of Pulse Trading Cards, with a selection of the various artworks the two films had around the world.

You will also be able to order or two previous post-apocalyptic blu-ray/DVD combos for Hands of Steel (1987) by Sergio Martino and Exterminators of the Year 3000 (1983) by Giulinao Carmineo.

You can also order the VHS-type collector edition for Albert Pyun’s Cyborg (1989) starring Jean-Claude Van Damme. We kept the very last copies of this edition which is totally sold out everywhere else. You could get it also with the Cyborg t-shirt with the new design created by cult French artist Laurent Melki.

That will also be the opportunity to order the beautiful Death Watlz LP release for the Riz Ortolani soundtrack for Warriors of the Year 2072, with an exclusive artwork by luke insect.