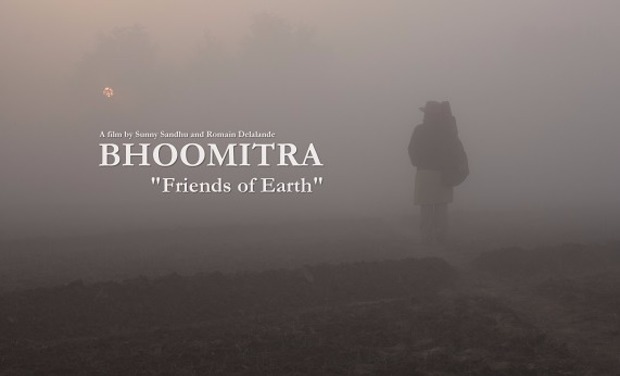 The project in 2 min

“Bhoomitra” (friends of earth) is a documentary about the severe environmental crisis or Ecocide going on in the fertile Northern plains of India and Pakistan. A thick smog starting with the festival of lights and rice harvests every year in Nov has become a major problem. 90 percent of this smog comes from burning rice stubble. In Punjab there is an ongoing cancer epidemic and increasing infertility due to the persistent use of pesticides, GM crop technology and increasing levels of uranium in the groundwaters. All this has been well documented and the Government is fully aware of the situation. There have been policy changes, however, the impact of such changes have clearly had a negligible impact on this current and escalating crisis.

In the BHOOMITRA documentary we will capture the lives of Natural farmers, doctors, wildlife experts and artists who are sowing the seeds of change.

It will document the work of Dr Sunny Sandhu who has been involved in the conservation of river dolphins (“Bulanaji”). He has been working on raising awareness about the preservation of wildlife, the protection of forests and the promotion of Natural farming. We will follow his journey, meeting the people involved in positive environmental actions in India.

We will also document the lives of the Gond tribe in Madhya Pradesh who paint Trees of life. This will allow us to contrast modern agricultural life against primitive cultural life. This is particularly relevant as the Punjab agricultural model is being copied everywhere else as the best model.

How it all started

It all began when in 2011 Dr Sunny Sandhu discovered that 30 kms from the house he grew up in, the waters of the river Beas were home to the endangered river dolphin. He realised the disconnect between him and the ecosystem that he grew up in. In 2011 he started a project to help conserve the river dolphins of Punjab. He has been conducting workshops in schools and organise ecotours for students and tourists. He has also been actively involved in promotion of Natural farming.Natural Farming uses earth friendly methodology to grow food. It involves protection of all life and utilising what’s available at the farm.

Punjab is just 2% if the agricultural landmass in India and it has been producing 40-50% of the grains for the country. This small region lays claim to the most prolific use of synthetic pesticides and fertilizers in the world. Between 2011 and 2012 Dr Sandhu worked with groups of organic farmers and activists to create an Environmental Health Action program, which lead to the first cancer screening program in Punjab.

In 2017,185 kms of the river Beas has been declared a conservation zone for River dolphins. After receiving this news, Dr Sunny Sandhu decided to start on Bhoomitra and document the ecocide issues that have plagued the area by interviewing the people he worked with for the past six years. Their stories will be heard through this documentary. It’s the journey of the Friends of Earth - the Bhoomitra .

Dr Sunny Sandhu : From my childhood I’ve been very inspired by environmental films and documentary series and I think that Documentaries are one the best way to open up conversation and introduce people to new revolutionary ideas.

How are you going to tell this story ?

Dr Sunny Sandhu : So, you are all going to follow me as I take this journey and meet my fellow co-workers, other activists, artists and farmers on this journey. We are going to be with them for two to three days and documenting their lives, following and understanding what their approach is, understanding their vision for the future and what is driving them. We are going to be combining this storytelling technique with music - the music which I have been already composing and writing for the environmental movement. So we’ll be combining those different elements in order to make a visionary statement which can propagate throughout society and create a positive impact.

Can you describe an episode of this Journey ?

Dr Sunny Sandhu : In Bhoomitra we’ll be documenting the work that I’ve been doing in the past few years in the village of Karmowall for the conservation of river dolphins. The episode that I would choose would be the 3 to 4 days journey on the river Beas. Staying silent in the slow old wooden boat with 5 or 6 other people going into the river slowly, trying to catch the breath of the dolphins. It’s so beautiful to be in this space I’m feeling like wow…. In the documentary the first thing we are going to do is get the word out about the conservation project. We’ll be visiting a school, getting a classroom involved, educating them about this issue and get them to see the river dolphins. We’ll try to show what the students feel about the river dolphins and how their feelings are connected with the very essence of this project. This will help us to see how schools can get involved and make an impact for the environment.

The Friends of Earth

Dr Surinder Kahlon. He is a poet and a homeopath running a charitable organisation in Purana Shalla,Gurdaspur District,Punjab. His work has influenced a lot of people and especially his son Dr Manbhavan Kahlon who is now Natural/organic farmer.

Manbhavan Kahlon. Son of Surinder Kahlon is an deaddiction counsellor and organic farmer.He started natural farming in 2011 after being encouraged by Dr Sunny Sandhu.He has been actively campaigning and educating farmers in state of Punjab to start Natural Farming. After 6 years, we will look at his experience and how it has change his life since he started natural farming.

Nikhil Sanger. He is a wildlife activist working in one of the most pristine environments in Punjab. He works in the north of India, in what is the last remaining forests of Punjab.In the Shivalik Range, we are going to hear his story and what his plans are for the future. We will be documenting how he rescues animals every day and educates youngsters and adults through workshops about ecology and the environment.

Dr Sunny Sandhu, Producer, Composer, Co-Director and Anchor of Bhoomitra. Dr Sunny Sandhu graduated with a bachelor degree of medicine in Asia's top medical institute AIIMS, New Delhi in 2006.He studied Naturopathy, Meditation and Yoga with the Sooryayog Foundation in Kerala from 2007 and 2011. He  studied classical Indian Music under Ustad Asad Ali Khan. Between 2011 and 2017 he has been working on the issues of climate change and ecocide arising from agricultural problems in Punjab whilst also starting a program dedicated to the conservation of river dolphins in Punjab. He is an artist and also runs a yoga and meditation center in Saint-Paul de Vence (south of France) where he now lives. https://www.atelierom.guru/

Romain Delalande, Co-Director of Bhoomitra. Romain Delalande is a documentary filmmaker based in Paris, whose focus is on environmental and social challenges. Graduated from the French School of Journalism, Romain Delalande has has been working for various network in France as an investigative journalist and recently as an independent documentary writer and director. He also worked as a Production Consultant for a Burmese TV Group directly involved in the launching of the first educational channel in the country. Lately he directed and produced a web-documentary on investigative journalism in South-America. When they met with Dr Sunny Sandhu in 2013 they were already talking about making a documentary together in India. https://www.youtube.com/watch?v=SMcwJKHg3q8&feature=youtu.be

Thomas Kurian, Sound Recordist of Bhoomitra. Is a location sound recordist who studied and trained in the U.S. and is currently based in Kerala, India. Thomas Kurian has done numerous projects including Documentaries, feature films, short films and advertisement films. He studied film at Los Angeles City College. He has worked on documentaries for the BBC, ABC Australia, RFO France, UNU Japan. He has done over 250 half hour talk and variety shows for US Television in Hollywood California. He met with Dr Sunny Sandhu in Punjab while working on the documentary « Toxic Valley » in 2013. http://www.imdb.com/name/nm3676482/

For the production of Bhoomitra we have a production team ready, a production schedule ready and we have already started the shooting that you can follow on this page https://www.facebook.com/BhoomitraDocumentary/ . So far, the project has been funded by Dr Sunny Sandhu, the shooting will be finished by the end of december and we would like the editing to start in february to be able to release the documentary next november.

However, to complete this project we need your support. Specifically, we need you to help us in finishing the editing of this documentary, and also help in the distribution and promotion of this project. The collect will be given to Dr Sunny Sandhu, the producer of the documentary. If our goal for this crowdfunding campaign is exceeded we will use the funds to organise screenings in Punjab and Madhya Pradesh to raise awareness and bring together the actors of the documentary. This will be the first convergence of organic farmers, wildlife conservationists and artists in India.

For that you can help us by donating on this page or you can just simply buy the soundtrack of the film which is available on my website (https://www.atelierom.guru/music). This will provide us with the support we need to spread the profoundly important message of this documentary to the rest of the world. Your help is much appreciated.

What we already Spent

What we are going to spend

What you can provide us with :

That’s all folks. Here's how you can help us finish our movie by making this campaign a success : Support our Kiss Kiss Bank Bank Campaign, help us get the word out, follow us and Share our campaign on : Facebook !!!