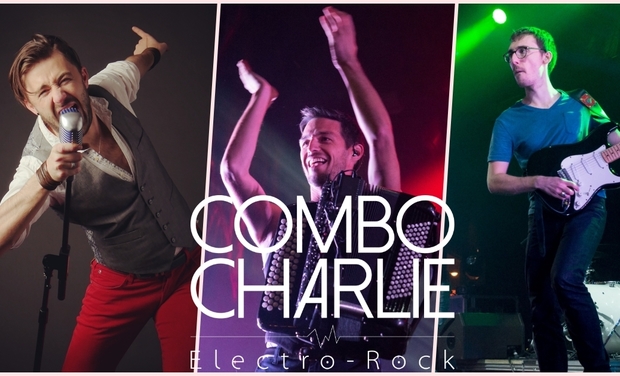 What do we want to produce?

We want to produce an ambitious video clip to obtain a quality artistic object. Technically and visually ambitous because, we wish to assign particular camera mouvements, who requires machinery. A licked image who imply a reel artistic work (Style of the image, costumes, staging...) and some special effects.

We also wish to finance a part of our new extended play (Album of 8 tracks). Combo Charlie wish to keep a work autonomy and self-produce the entire EP.

For this, there is different stages :

Composing work and collectif arrangement. Days in studio to Rec, Mix and mastering the music. The making of the graphics for the jacket and an photo shoot. Pressing of the CD. The collected amount will allow us to finance a part of this investment, in addition to the music video.

Axelle is a dynamic, anticonformiste person, with a great open mind. She likes to gather people and share new experiences. Passionnate by the cinema she leads a carreer as an Assistant Director and Stage Manager in the movie business. Shooting with different renow French Director such as Olivier Nakache et Eric Toledano, François Ozon, Michel Lecerc, Cédric Kahn, Deniz gamze Erguven...

As a Director, i was searching for an Artistic original collaboration. I wanted to put in picture a band who has a little something more. When i discovered Combo Charlie I had a big crush. First time you listen to them, you fell under their spell. They emit a crazy energy, a charism, an offset style with an affluent combinaison. Bref, ça sent le talent à plein nez. The fact that they combined Electro-Rock style with traditional instruments such as violin, accordion, shows that they have known how to create a clever blend of gender to give an atypical result.

Who is Combo Charlie ?

Imagine a playlist where mingle, Electro, accordion, rock, violin and vintage sounds. A DJ for the dance-floor, a guitar player and a singer strike by lightening for the rock energy. And to go further, two outsiders at the accordion and violin for unexpected sounds.

It's with this euphoriant cocktail that Combo Charlie from Lyon in France, communicate their stage enjoyement and their wheel to share with a growing public.

After a first EP, some concerts in France, a selection at the "Villa Médicis" of Rome in Italy, alongside Keziah Jones and Ofenbach, a selection at the Cultural French-German Institute, Metropole Lyon TV 's favorite. Combo Charlie work on his new EP for 2019.

Charlie is a complet and atypical Artist. He leads an international career as violinist and a pianist in the current music industry, but also as a singer baritone at the opera and theater. His several collaboration make him run through numerous festival and playhouse in the entire world, and record around twenty albums.

Greg, is a modern and ambitous musician. He was trained at the CNIMA and the conservatoire of St Etienne in France. Graduated from the conservatory of Gennevilliers (Near Paris), he was several times laureate of the concour ACF (Accordion club of France). Composer, member of several recognized musical band as "La Ruelle en chantier", "The Fat Bastard Gangband", "Wazoo", he multiplies the renow concerts and festivals in France and in Europe.

What are the "Flower Bombs"

Those vegetal bombs are made of clay ball, who protect and enfold some melliferous flower seeds, destine to feed the bees. The seeds can bloom everywhere where there is some soil, without any needs to plant them.

The idea is to flower urban spaces, even the most unexpected places, on the 60's flower power strain.

To go further on this citizen -green action, we propose you to flower a tree in the city of Lyon-France, with those little flower bombs. The Lyon metropolis and their gardener foster this initiative and commit to don't remove those freshly new flowers.

Convinced of the utility and the poetry of those "flower Bombs", you'll can find them on our "Combo Charlie" web site and at the end of our concert.

Face to the society challenge that is about to come, every action count, so help us to flower the bitumen !

The amount of money of 4500€ that we seek, constitue for us the minimum rage.

It will be split between the release of the music video and the creation of the new EP, plus the cost of the counterparts and the 8% fees for kiss kiss BankBank.

For the Music video it will bankroll :

1- It will bankroll essentialy the rent of the professional equipment close to different buisness.

2- The post-production part, included the editing, the calibrating of the image and  the special effects mostly.

3- A small logistic part, intangible cost of a small filming, like to feed everyone, transportations of the people and the equipment...

For the EP it will allows us :

The recording of the titles in a  studio. The mix, the mastering of the EP. The graphics and the visuals of the jacket. The pressing of the CD. The payment of the author dues. (SDRM)

The crowdfunding is our best shot to make our project a reality. Your are the principal actors of his existence, and for us it is important to get you involve. From the funding to the creation part until it's outcome. We will keep you in touch of the entire process.

The founds will be collect by "ESCALE PRODUCTION" (A French non-profit organisation, 1901 Law) who manage the financial part of the project.

And if we exceed the wishing amount ?

​This sum is the minimum that we wish to obtain. With it we could realize the project by making some compromise. Especially one the special effects of the music video.

If we exceed the amount of 4500€, thanks to your generosity and your faith in our project, we could invest in more advanced artistic work with the special effects. It will allows us to finance a bigger part of our new album.

The ideally situation that reflect the market price. This sum will allows us to finance the totality of the project (the video clip and the new album) without compromise.

Former conterpart + Link to the Making off + A box of flowers bomb stamped "Combo Charlie.

Assist at the opening night of the new Combo Charlie EP and the broadcasting of the video clip in exclusivity.

Assist at the shooting of the video clip! Your Day Will be ponctuante of Discovery and surprisses.