Help me to help them! 25,000km on a bamboo bike to provide 2,240 Indonesian children with clean drinking water. 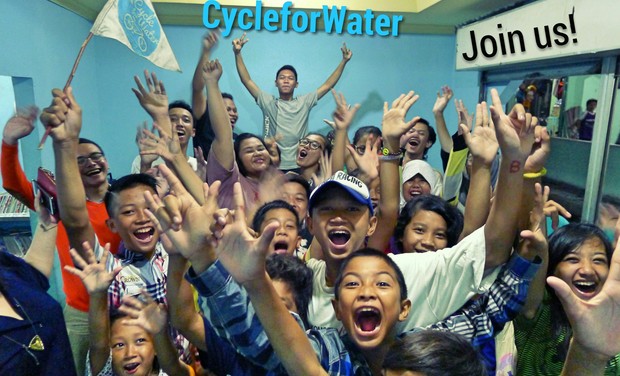 The story? It begins in the Netherlands in 2009. It is the story of Joost and Michiel, two young students who decided to cycle 30,000km from the Arctic to the Antarctic on bamboo bicycles. Their idea? To prove that a crucial development issue such as a lack of access to clean and safe water can be solved using sustainable solutions.

Amazed by the actions of Joost and Michiel, I wanted to continue their work, and turn Cycle for Water into a movement that gives everyone dedicated to contribute to the cause of water conservation and sustainable development the possibility to do so.

As a result, a West to East expedition, 25,000km from France to the other side of the globe has been undertaken... The final destination is New Zealand!

A few months ago, with the help of my friend Simon who joined me from France to Thailand, the first fundraising campaign was a great success: kisskissbankbank.com/cycleforwater

More than 10,000 Euros were raised to provide the necessary infrastructure to bring sustainable and free access of clean water to 4 Thai primary schools, benefiting 1,040 kids, their families and neighbours. Thanks to the collaboration of the HOAT Foundation, the construction of the facilities has now started.

But it doesn't stop here.

By having experienced first-hand the clean water issue facing communities while pedaling the Indonesian roads, my visit at World Vision Jakarta was a chance to collaborate on a great humanitarian project. Let's help to raise funds for those who are most in need of access to safe water; a basic human right and one of the core Sustainable Development Goals the world intends to meet by 2030.

I'm a 25 year old big dreamer, lover of open spaces, crazy fundraiser for sustainability, and the only French student to have participated in the International Antarctic Expedition 2012 with Robert Swan, OBE and 2041. It is also by meeting with Joost and Michiel, the founders of Cycle for Water, that after completing my studies in Corporate Social Responsibility, I gave it a try to make Cycle for Water a movement!

After 13 months of endless pedaling, here I am crossing the incredible kiwiland. Have a look at the last leg of the expedition till the finish line!

Wahana Visi Indonesia (WVI) is a humanitarian organization working to create lasting changes in the lives of children, families and communities living in poverty.

The humanitarian project is in Southwest Sumba, a district of NTT Province, which is located in eastern Indonesia.

Based on statistical data, the region has a variety of water problems, especially the scarcity of clean water. Its impact on the community health level in the province, Southwest Sumba gives highest contribution for higher malnutrition prevalence compared with other provinces in Indonesia. 63.05% Household in Southwest Sumba Regency does not have a source of drinking water, and is the highest of NTT Province.

The issue is the link between access to water and education, which is more intertwined than it seems. Indeed, in a region where there is a critical lack of clean drinking water available to people, it is so much risk that young girls leave school before the age of puberty.

The boys also see their limited future without a stable supply of drinking water, decisive criteria for their health and therefore the success of their studies.

A lack of clean water increases school absenteeism of its students, and indirectly increases poverty in a given region.

Wahana Visi Indonesia breaks this vicious circle by building the infrastructure and encouraging children to bring drinking water from the new clean water facility to their homes.

With Cycleforwater, the plan is to have a joint fundraising operation with the campaign #beranimimpi to collect the last necessary funds, 16,500 US dollars to provide a clean water facility in the village of Ate Dalo. A part of the water infrastructure is currently already being built (see the first stage of the process above). It will be located in a public area, in front of the public elementary school, giving free access of clean water to 2,246 children and the whole community.

It will be a borehole well with a sustainable filtration system set up by the NGO Wahana Visi Indonesia, and the collaboration of World Vision Indonesia.

Finance the joint water project which provides a borehole well system, its infrastructure and maintenance to the village:

The campaign #beranimimpi already collected USD 17,000. As the total cost of the water project is USD 33,500, Cycleforwater needs to raise the USD 16,500 left to make it happen!