Support our respective creations at Avignon OFF Festival : "Domino" by Rafael Smadja and "Compact" by Jann Gallois 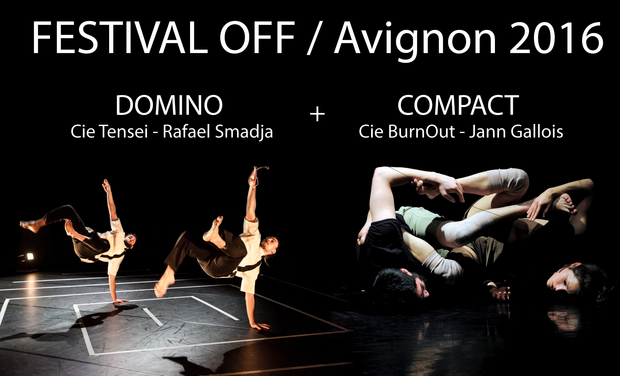 As you can see on this video, but might not understand, Rafael Smadja and myself are both choreographers and we have decided to team up to make this ambitious project of going to Avignon OFF festival this summer possible. We will present our own creations in one of the most important festival in the world ! This project is a real opportunity to develop touring for our works.

As we are young, healthy and a little naive, we thought it should be now and not another time as it is a project which requires so much time and energy!

The Théâtre Golovine, has let us rent its space between July 7-30, however without financial means and support, we can put all our good will and strength... without your help, it could not be possible.

In a framework flirting between absurd and surrealism, two dancers come across an hypnotic and binding scenography. A labyrinth where dance comes out of the emotional state. Two humans, two dances, different and complementary. Contagious, it circulates as a wave crossing two bodies, leaving a visible trace and marking these two men with a contagious empathy. DOMINO deals with influence.

With Compact, Jann Gallois, imbricates two bodies one into the other in order to question the notions of duality and fusion while offering a mirror to the obsession of contact, real or virtual, which haunts the society.

True performance, during this dance,  two artists become only one. The duet becomes solo. Duality, fusion, coexistence remain the master words of this work, both soft and powerful. At times violent, delicate, severe and then burlesque the dancers take us in a whirl of emotions up to the expected harmony .

Self-taught by nature, Rafael Smadja meets hip-hop culture in 1998 and in 2003 he left the world of martial arts for dance art. In order to learn the basics and foundations, he went in search of the roots of hip hop dance and met pioneers such as Mr Wiggles, Ken Swift, Future, Brian Green, PopinPete or Mamson. A few years later, learns to go beyond the "code" and "deform" it. His dance will follow a path focused on the research and development of a vocabulary of its own. Imad Nefti and Olivier Lefrançois, both teachers and choreographers will be his «deformers» and guides during this period.

Between 2012-2015, he worked with the danish company Next Zone directed by Lene Boel for the piece Human Planet Shaman, Yann Marussich, stage director Tali Serruya, choreographers Olé Khamchanla and Bouziane Bouteldja as well as Stéphane Fortin from Cie Thêatre Bascule. With Tensei, his own company created in

2012, Rafael Smadja created as a choreographer Fleuve (2012), Presk (2013), Cactus (2014), a commission from Antigel Festival/ADC Geneva and Domino (2015), work for which he is nominated at the Beaumarchais-SACD Prize. He is creating a new work, Identité en Crescendo, which will have its premiere at Festival TRAX in Saint-Etienne in June 2016.

After many years studying music at the conservatoire, Jann Gallois started dancing in 2004. It was Thony Maskot, a mainstay of the French hip-hop scene, who introduced her to what was to become her passion. At the same time, to widen her skills, Jann trained as a contemporary dancer at the Peter Goss School. She also trained as an actress at the Ecole de Théâtre de Paris, under Colette Louvois, whilst following her self-taught path.

The success of that piece encouraged her to set up her own company, BurnOut, and to write her first own solo piece, P=mg for which she was 9 times awarded by national and international prizes, such as Paris Young Talent Prize and Beaumarchais-SACD Prize in Paris, Solo-Tanz Theater Prize in Stuttgart, Masdanza Prize in Canary Islands, Machol Shalem Prize in Jerusalem, and Gdansk solo dance contest Prize in Poland.

In 2015, Jann Gallois received the support of of the French Ministry of Culture with a subsidy and confirmed her artistic signature, combining choreographic and theatrical work, by creating once again a solo-piece called Diagnostic F20.9. In August, she was named “Best choreographic hope” by the german magazine Tanz of the year 2015. She creates Compact in 2016, a duet piece with her main partner Rafal Smadja who became her choreographic assistant.

Between 18-22 July 2016, she will present a new work at Théâtre de la Parenthèse in Avignon : Carte Blanche, a feminine trio as part of the platform "La Belle Scène-Saint-Denis", organized between Théâtre Louis Aragon in Tremblay-en-France and Théâtre Gérard Philippe in Saint-Denis, both near Paris.

Cédric started dancing in 2008 with bboying. He then starts his collaboration with Rafael Smadja in 2012 with the first duet, Presk .

The same year, Cédric goes to the Junior Ballet of Geneva, where he danced a varied repertory (Hofesh Schechter, Wayne Mcgregor, Cindy Van Acker, Alexander Ekman, Barak Marshall, Joszef Trefeli, ...) in Switzerland and in France between 2013 and 2015.

During his formation at Ballet Junior de Genève, he also creates a duet with dancer Evita Pitara which will be presented in Switzerland and Spain.

In 2014, the collaboration with Rafael Smadja continues at Cie Tensei and create Domino. In 2015, he participates to the projet “Sound of Music” by Yan Duyvendak and start creating da solo titled “Labyrinthum”, presented by Cie Tensei in March 2016 at the festival Les Hybrides Hiphopées.

Loic Brisset is lighting designer and stage manager for Cie Tensei since 2012. Self-taught,  he has been working amongst the dance, theatre and opera scenes for 15years.

He works for main Swiss venues such as le Galpon, l’ADC, le Grutli ou Am-Stram-Gram under the direction of Fabrice Melquiot.

« Rafael Smadja distils through this show fineness and lightness in a narrative and poetic dance. »

« In Compact […] her research on the body and her outlook on human cross in a way that is always relevant and surprising . […] Until now, [Jann] Gallois ha impressed by her capacity to transform a physical constraint into a choreographic invention.  »

« To see Jann Gallois dance, is like being in front of an hybride body, . where the subtlety of her articulations and the delicacy of her limbs compete with an internal and very powerful force. »

« She starts to be well spoken of and it is only justice. She has a powerful voice and a lot to say. »

This budget will mainly be financed by our own funds, provisions and self-financing. It will be the case mainly for the theatre and some technical material rental (15 000 €) as well as music and artists rights SACEM / SACD (2 200 €)

Rent a home for the whole team for the length of the festival : 2 dancers/choreographers, 1 dancer, 1 stage manager, 1 touring manager et 1 courageous  friend to help us with logistics.

if this crowdfunding goes miraculously over 6 500€, it will help us towards the cost of the theatre and technical material rental (15 000€).

Thank you in advance for your support, and if you can't make a donation, sharing this campaign across your friends on social medias and others will already help us a lot! :)

1 additional invitation to discover our 2 beautiful performances, in Avignon or on any other touring dates + all previous compensations!

A meal with the whole team in Avignon or on any other touring dates + all previous compensations!

A private workshop given by Jann Gallois and/or Rafael Smadja for you and your friends or your dance school, cultural centre, school group... + all previous compensations!