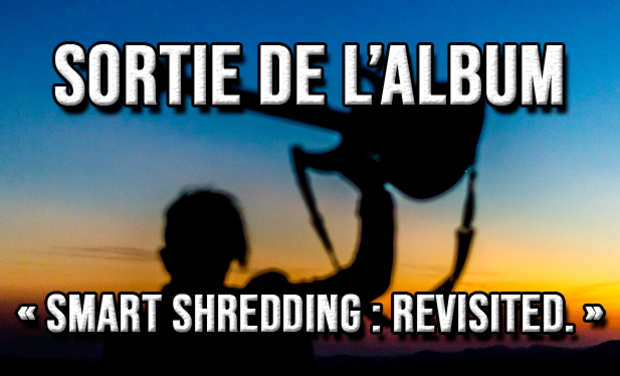 "SMART SHREDDING : Revisited." is the result of 3 years in the making ... well, even more than that because as its name implies, "Revisited", is a revised and improved version of the original "SMART SHREDDING" album initially out back in 2011.

However, lacking computer music skills back in the day and having it composed in the rush, assessing the fact that i did "spoil" the final product, i took the sad and wise decision NOT to spread the world about it, otherwise i would have been risking getting a detrimental feedback instead of helping growing as an aspiring musician.

This is a 6-track full length album, 40 minutes long of  instrumental progressive music, lying between Prog Rock and Jazz/Fusion, along with EDM accents.

But far more than that, it suggests an ambitious undertaking.

"Shred" which in French is literally translated by the word "déchiqueter"(=tear apart), label initially used in the US since several decades in the board sports world to qualify something or someone as "cool".


Therefore, one can translate "SMART SHREDDING" literally by "déchiquetage intelligent" (in French), to shred ? Yep definitely, but in a wise way.

By no means, because behind this label which, at first sight would have sounded very cocky, lurks a concept aiming to restore the original prestige of a musical genre that have been carrying a pejorative connotation for so long : "Shred".

Those of  the most influential "Guitar Heroes" in the past years such as Steve Vai, John Petrucci, Paul Gilbert, Richie Kotzen, Guthrie Govan, Greg Howe, Joe Satriani, Bumblefoot, Allan Holdsworth and many more indeed ...

Not only has it for mission to drag the style out, but also to expand towards more modern sounds and endless possibilities.

And on the bigger picture, helping people reaching greater heights in driving established artists towards new technologies, enhancing virtuosity servicing musicality into songwriting, composition in an endless-way, but their audience as well in bringing well thought-out music to the table.

// WHAT ARE THE KEY ASPECTS OF A TYPICAL "SMART SHREDDING" ALBUM ? //

Not only it is necessary to enhance virtuosity towards the guitar but for EACH instrument as well,  implying being a multi-instrumentist composer and/or being surrounded by top-tier musicians.

In a nutshell : Only preserve all the good things from the genre while improving it and spreading it to as many as possible !

// DOES IT ALREADY HAVE "SMART SHREDDING" ARTISTS ? //

Apart from DoZ (Dorian CIET) which is the inventor and initiator of the genre since its inception in 2010 (pun intended), there are already some artists that we can qualify as "SMART SHREDDING" : Animals As Leaders, Intervals, Plini, etc ...

(Song available for IMMEDIATE download as exclusive preview for contributers only starting from a 2€ donation amount.)

"Insane City", the only "Metal" tune off the album features a guest solo by a very gifted guitar player from a famous French Prog Rock band, pioneer of its kind in the country.
He is also well-known as one of the elite teachers from the esteemed music school from Nancy, France : Music Academy International !

Additionally we have "Inner Thoughts" : An original track with a unique instrumental atmosphere featuring quite private lyrics (written by myself), sung by Aleksandra Radosavljevic on vocals.

Which is moreover the only song off the album featuring vocals !

The identity of the remaining guests will be revealed as the campaign progresses ... Patience !

Graduated from MAI (Music Academy International) in Nancy, France since 2010, i have been self-taught in computer music for more than a decade.

Branch in which i have been experimenting a lot over the years and more importantly on my own along several books and educational videos, allowing me nowadays to be a self-produced artist with the upcoming release of my first official album : "SMART SHREDDING : Revisited."

Album in which i play guitar obviously, bass, keys, and in which i have been composing all of the drum tracks as well.

I have been and i am working with various musical professional projects, the most recent being :

"The Roadies Of The D" tribute to Tenacious D : Jack Black's band.

Mainly fan of Progressive Rock, music on a larger scale and curious by nature, i have been listening to a lot of music in various musical genres over the years since i am 14 ans, from which i have been playing guitar.

Music tech lover, today i am writing and producing mainly my own music, but i am also working on a unique music book about hamonization and composition coming out soon.

The aim of this campaign is mainly to fund 1 to 3 videoclips as planned as early as the album drops aiming a 2700€ raising regarding the FIRST step.

Then, the next steps will fund communication allowing its promotion in France but hopefully overseas with a huge presence on the internet among others means.

Moreover, i have a touring concept to suggest in France in the first instance, and then overseas along local music business actors.

More details in PM for those willing to contribute to the project ... ;)

Not to mention the considerations without which that campaign would not have any concern whatsoever, among these :

Here is the list of each album related fee :

Without that amount, considerations will NOT be able to be manufactured and promotion of the album will be highly weak ...

This is why it is crucial to reach at least 2700€ to confirm the campaign.

So if as myself you believe in that project and you love the music and/or the endeavour, don't forget to share that page as much as you can. This will mean the world to me !

A huge THANK YOU to each contributor !