Help to create the module that will locates your drone, anytime, anywhere. You'll never lose it! 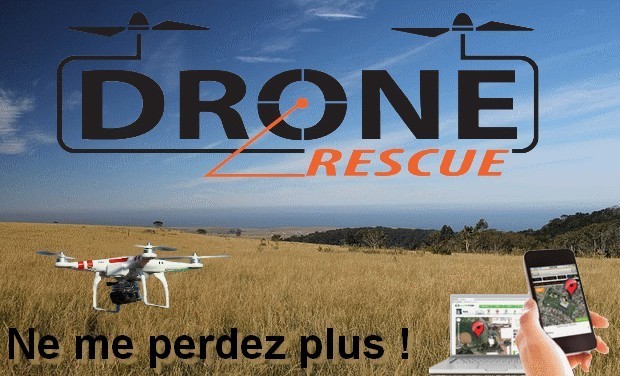 For RC model guys but not only :)

Fear of losing his UAV, his bicycle? How was my flight today?

No need to go far away to find his UAV that landed himself for some reason or another.

Install a droneRescue on your favorite device and follow it from your home, your mobile phone or tablet.

droneRescue retrieves information from GPS positioning UAV, regardless of the model (Naza, APM, NMEA and UBX). It stores in its memory the details of the the flight and internet broadcasts its position each 6 minutes or on demand with the failsafe switch. The network usage is 140 messages per day for the 8€ per year subscription.

Access to records in realtime and historic from your computer, tablet or smartphone, and program your own application with the API.

droneRescue takes its power directly from the connection of the GPS receiver. A backup battery supplies it for the last transmission of the coordinate when power-off (useful in case of a crash) or to acquire the GPS positioning before starting the UAV. A pressure sensor validates the moment of take-off and landing.

droneRescue needs no wifi, or smartphone, or SIM card.

It connects itself to the internet via SIGFOX, a national, european radio technology and soon worldwide. Plug it and it's online!

There is a subscription of 8 € per year for communication. A bit like GSM, but extremely simplified. To renew, simply a few clicks on http://www.dronerescue.fr/demo.php No need SIM card or papers to sign. (The subscription is paid only once per tag. Then everyone has access)

droneRescue is very small, no more than 3cm long and 2cm in height to less than 50 grams, it can placed anywhere. You can compare it with an arduino nano board:

To 109 € with 1-year subscription included (price is reduced during the campaign), droneRescue is affordable, cheaper than the GSM market trackers and lighter.

An ingenious combination of simplicity and new technologies, could save your investment of several thousand euros. You can see a sample on top of the battery.

The droneRescue push their data. The goal is to create a universal network of users airspace anonymously, federating all users. An identification number is visible without being able to link it to a person.

Today, most "connected devices" collect the data. Manufacturers create THEIR network, they are ultimately the only real beneficiaries.

droneRescue thinks differently. All droneRescue provide public access to their positioning in real time, and to everyone without distinction. Thus, everyone is free to see what type of objects is evolving nearby.

The goal is to create not A private network, but rather open to everyone network. Common property of navigation, just like Flightradar24 for civil aircraft.

droneRescue is the first of a new generation of communication means for UAV.

That is why, all plans, drawings, manufacturing files and source codes from droneRescue become available for everyone to improve, produce, and why not market its own droneRescue.

droneRescue will be open-sourced at the end of the campaign, so we can together improve before starting production.

HOW WAS BORN THE PROJECT?

A friend has built an UAV but due to lack of time, he had not enabled the failsafe or restricting volume of flight. He did not flight in a small space. During a flight, having too much height and too much confidence, the UAV went in one direction despite the actions of the radio. We will never know how or why but the UAV went several miles before landing automatically for lack of battery. He lost his UAV, his zenmuse and his GoPro.   The drone features a GPS, but only himself knows where he is.

It seemed obvious to me that you could improve it by connecting the on-board GPS to the outside world. So I decided to launch a prototype.

I started from an Arduino board which integrates a SIGFOX transmitter and I connected it to the GPS of my UAV.

Now as the prototype works and feasibility is demonstrated the first step is validated.

- Create an association, a company

- Finalize the website to collect information from the users

- Finish the development by implementing an automatic recognition of all GPS receivers on the market (Naza, UBX, NMEA)

This creates a number of fixed costs and requires a lot of computing resource that I can provide for my project quickly.

The main hardware that composed the budget are a radio module at 30€, an Arduino pro mini at 12€ and an annual subscription of 8€. But I have to add the manufacturing of the printed circuit, some CMS components, 3D printing of box and time for assembly.

So I suggest you start with me in this adventure.

This is an opportunity to support an innovative project, and advance technology that will benefit the entire community radio designers and professionals UAV.