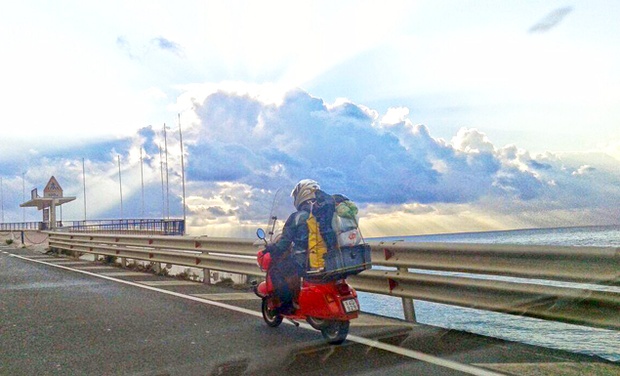 “Brum brum”, as Giorgio Bettinelli's book which I came cross almost by chance. I decided that, sooner or later, I would have accomplished my short Vespa trip with the same spirit that animated Bettinelli, no shortcuts, with maps and among people, free to be guided by the essence of the journey along the perimeter of Europe which, indeed, is the "home" of those who are my age. The E.U. member countries, the candidates and those considered potential candidates: I would try and touch all of them to discover what their roads would have to tell. Riding a 50CC Vespa, top speed 45km/h, because what I wanted to see was not the continent that runs along the highways, I didn't want to hop from town to town. Because I like looking around even while I drive.

Last came the idea of the World Guinness Record. The cherry on top, not an obsession at all. Upon arrival we'll see how far we drove.

Simone Sciutteri, a 33-year-old italian from Celle Ligure, has been a lifeguard from march to october in Albisola for many years now. Simone has always been a reader, a writer (personal blog with thoughts and stories, and the publication of a poetry book), a traveler: from the Transsiberian  to SouthAmerica, through a adventurous African Rally on a €400-worth Y10. In november 2014 Simone packed his stuff on a 1985 Vespa Pk50 and decided to travel across all Europe. A total of almost 16K Kilometres and the Guinness World Record for “The longest journey on a 50cc”, although that was not his obsession: «The thing about the Record came long after the idea of this trip…».

We met in 2010, right after my old scooter blew. At that time it was blue, although since the beginning I imagined it red. Pulled out of a friend’s garage, where it had been parked for two years, it started running again on June, 14th 2010. It sill didn’t know, but since the very first time I started the engine I knew that sooner or later we would have accomplished a trip together.

After our dry run on a Celle-Lugano full of troubles, the set-up with the Motomeccanica crew and the red paint-job, we were almost ready.

One night I was watching Denver Broncos vs. San Francisco 49ers. Peyton Manning, 38y.o. Broncos QB broke the NFL all-time-touchdown-pass record. Him, who stood by for two years due to a neck injury, whom was declared too old to get back to the top, dumped by his old team. He got up after many difficulties and, with that pass, he was getting back, even better than before, to make NFL history. There was the name. We were ready to ride.

During the trip I realized that Eurovespa was becoming a collective adventure.

Many followed the trip kilometer after kilometer, through moto.it or on the Facebook page and along the way I met lots of people with whom I shared a little part of the trip: a stop-over, an evening, a beer, a tale. With the documentary I want to connect all the pieces, tell the trip in its entirety, show those who helped me on the road the kilometers I drove to get to a point and the ones I did afterwards.

Because it is a way to say thenk you to all those who have been part of Eurovespa.

Because it has been a important experience I want to sort, recollect and tell.

Because I imagine that someone I've been chatting with in a bar perhaps is now asking himself: I wander what's up with that crazy guy on the Vespa.

Who will contribute to the crowdfunding should be moved by the curiosity for a uncommon story to be told, by the belief that a journey on a 50cc Vespa is a good way to tell the roads and the people of Europe, on top of being a interesting challenge.

Because he/she thinks it is a good thing, back from an adventure, being able to pay tribute to all those who made it possible.

The film will be realized by Igor D’India, Simone's friend and adventure partner. Together, in 2009, they drove the Africa Rally, a "crazy" odyssey on €400-worth Y10, that had already survived a Mongl Rally a few months before. Instead of the uncomfortable old Y10 seats, for “Eurovespa - the movie” Igor and Simone will seat again side by side in the editing room to relive and transfer the emotions of the 15.586 km across Europe.

His career as a documentarist begins in 2005 when, 21-years old, filmed  “The windows of Beslan", a independent reportage about the massacre in little village in Ossetia. In his homewtown Palermo, in 2010 he denounces in “Oreto - The Urban Adventure” the estate of degradation of the river that crosses the city and, in 2012, he spends one month in total isolation in the "Pidocchio cave", without watch nor light, telling the sensorial experience in the movie "Geology of a dream". 2014 is the year of consecration amongst the big names of new generation adventurers and documentarists thanks to The Yukon Blues, in which he tells his expedition through Canada and Alaska, 16.000 km hitch-hiking and 1.400 solo-paddling on a canoe on the Yukon River, following Walter Bonatti's trail. The Yukon Blues is distributed on national and international TV channels, and in the collections "The Legends od Alpinism" with the italian most important sport-newspaper Gazzetta dello Sport.

The amount to raise is 15.586, just like the kilometers we drove on Peyton across European streets.

Because crowdfunding is not just like any other way to finance tech gear, work and promotion that are necessary to make the documentary. It is also a way to relive the adventure, kilometer after kilometer. With the awareness that it is going to be tough, we might have to limp on just like Peyton on Latvia's snow-covered streets. There will be someone who shakes the head, sentencing this is a crazy idea. But we know that the determination of getting to the finish line is stronger.

How we are going to use your money

- Rewards for the funders

You've been so impressed by Simone and Peyton's trip that you can't wait to see the movie. As soon as it's ready, you will be able to download it in advance from Vimeo on demand.

OK, we get to big fans here...Your helping much and deserve a nice bumper sticker you can attach on your motorbike, your helmet, ... + digital download of the movie from Vimeo on demand.

You feel like Eurovespa is a perfect fit for you: get the official t-shirt + digital download of the movie from Vimeo on demand + bumper sticker.

How big is Europe? What do 15.586 km of secondary roads look like on one single map? The effect is difficult to picture, imagine riding along at 45 km/h. The Eurovespa poster shows the entire trip of Simone & Peyton and the most important stop-overs. + official t-shirt + bumper sticker + digital download of the movie from Vimeo on demand.

Eurovespa's trip is made up of encounters, discoveries, emotions, ... and broken spark plugs too! We'll donate one of them to you and we'll tell where it comes from. + digital download of the movie from Vimeo on demand + bumper sticker + official t-shirt.

Even before being a traveller, Simone is a writer: "Lettere da un ammutinamento" is the collection of the poems he posted in his blog between 2009 and 2013. We'll send it to you + digital download of the movie + bumper sticker + official t-shirt + poster.

The documentary will show the trip stage by stage... but there's even more to tell! You will be able to see the backstage video made especially for supporters: it will never be published elsewhere. + digital download of the movie + bumper sticker + official t-shirt + poster + book.

So you think Eurovespa was a great trip and its story must be told. And you want Simone to do it in person? Organise a special event dedicated to the passion for the 2-wheels-world, for the trip, for the good stories and the importance of telling them properly. Simone will attend your showing and will be pleased to answer curiosities and reveal some background of the trip.