Finding the Lionfish: help four friends make a short documentary on one of the most fascinating and voracious invasive species of the Med! 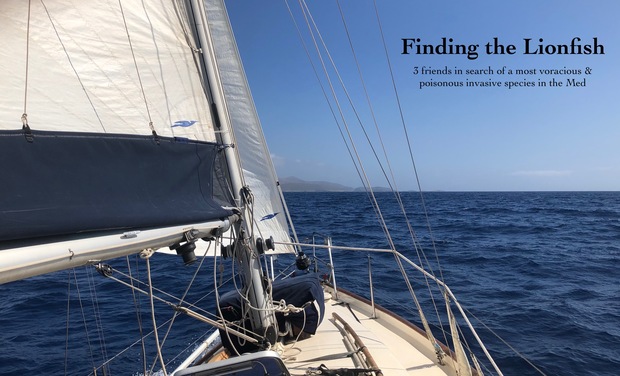 4 friends + 1 sailing boat --> 1-month expedition in the Dodecanese (Aegean sea) -->  1 documentary, 1 photo exhibition, conferences, and plenty of exchanges with the local community, including online with all of you!

Find all the latest news on the project on its FACEBOOK page, here https://www.facebook.com/FINDINGtheLIONFISH, and on INSTAGRAM here https://www.instagram.com/stories/findingthelionfishproject/

So, in more details,

October 2020, the Agean sea around the islands of Samos, Fourni, Patmos, Lipsi, Agothonisi and Leros. Three friends. A sailor, a marine biologist and a filmmaker. And the Lionfish, a beautiful voracious and venomous invasive species that arrived from the Red Sea and has invaded the Mediterranean Sea.

Far from the city, the office and the screens, three friends have decided to go sailing, observe the sea, admire its biodiversity and bring back home images and filmed documentation of the presence of a new emblematic fish in the Greek waters, the Lionfish.

With your precious help, we will sail and dive in the quest of the Lionfish in the Aegean, transforming this expedition into a documentary, which will shed light on one of the effects of the ever increasing anthropogenic pressure on our planet and marine biodiversity.

The documentary will shed light on the proliferation of invasive species in the Aegean, such as the beautiful and venomous Lionfish, a voracious predator that now inhabits the waters of the Sea of the Seas, the Mediterranean altering its ecosystems. Indeed, a number of new species have increased their arrivals, through ships’ ballast water discharges and also with the recent (2015) widening of the Suez Canal, the artificial waterway that connects the Mediterranean with the Red Sea.

Finding the Lionfish will also be a filmed collection of the interactions with the local communities, the fisher(wo)men and the other seafarers, investigating on their relation with this new venomous inhabitant, the Lionfish.

The crew: 4 friends, one sailor + one marine biologist (both from the island of Venice) + and two filmmakers (from France) = all in love with the Sea and its flora & fauna. This won't be the first time they swim, dive and work together, but it'll be the first one in which they will set sails together in the quest of an invasive species of the Med!

Piero, formerly a lawyer working on Ocean Economy around the world who decided to go back to Nature and live and work by the sea on his tiny old sailing boat. He is more comfortable on his boat than at home.

Federico, a marine biologist and free diving instructor, who’s goal in life is to share and transmit his great passion for the sea and its inhabitants while spending as much time as possible in the water. He firmly believes he can speak with octopuses.

Antonin, the filmmaker and experienced spearfisherman, whose blood is considered to be as salty as Marseille’s waterfront.

Solène, the second camera of the crew, travelling since 2014 relentlessly .. she wanted to stop and settle for a while but eventually decided to join us in this adventure. Yes, she speaks to penguins.

With your kind contribution, we will be able to cover part of the overall expenses, including:

Our home for the duration of the shooting of the doc (approximatively one month, in October 2020) will be Piero’s Swedish 41 years old Halberg Rassy Monsun31, and their field of operation will be the fabulous islands of Dodecanese.

A very big thank you!

BIG THANK YOU Invitation to the avant-première of the film in Athens, Marseille, Paris or Venice Your name in the credits of the film A copy of the DVD of the documentary

BIG THANK YOU Invitation to the avant-première of the film in Athens, Marseille, Paris or Venice Your name in the credits of the film A copy of the DVD of the documentary

IMMENSE THANK YOU Invitation to the avant-première of the film in Athens, Marseille, Paris or Venice Your name in the credits of the film A copy of the DVD of the documentary A post card from Lipsi

IMMENSE THANK YOU 2 invitations to the avant-première of the film in Athens, Marseille, Paris or Venice Your name in the credits of the film A copy of the DVD of the documentary

Private, NGO or Company, we will make your name and brand visible on our facebook page and website and in all our communication means. We will also discuss about a possible collaboration.