"Flamenco Dragons" is a 52 minute documentary to be in made in China, following the creation of the performance of flamenco fusion. The choreographer, Zhen Zhao, is one of the best flamenco dancers and singers in Chna. 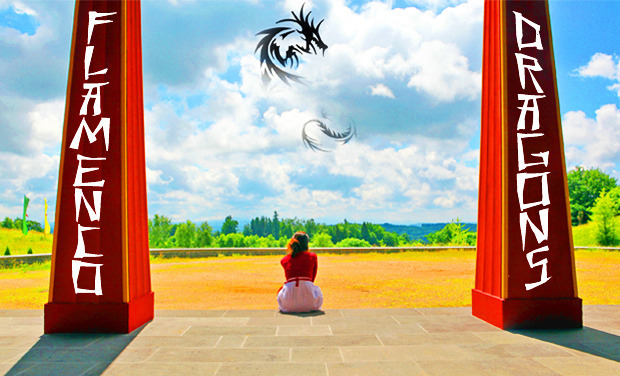 « Flamenco Dragons » is a 52 minute documentary to be made in China, following the creation of the performance of flamenco fusion. The choreographer, Zhen Zao, is one of the best flamenco dancers and singers in China.

The Breaking Arts Festival will take place in Guangzhou from November 2 to 12. It is  the IVth Festival of Contemporary Dance in China. This year, Zhen Zhao introduces a new aspect to the festival, flamenco. Zhen Zhao’s project is called “Dazzling Spin”. She intends to gather five artists from around the world for four weeks to prepare the show of “flamenco fusion”. The artists involved are :

Zhen Zhao will combine Spanish flamenco with Chinese traditional music, an alliance between East and West: the crossover of savage expression of Spanish flamenco with the gentle interpretation of Chinese dance. The show will be presented in three prestigious theatres in Guangzhou: the Huanghuagang Hall, the Yunna Studio and the Sapphire Arts Space. The documentary will follow the life of the troop during the six weeks of rehearsal and performance.

From the 1 to 31 October, five artists from three continents will meet in the Yunna Long studios in Guangzhou. Zhen Zhao, choreographer, will design a show fusing Spanish flamenco and traditional Chinese music. After four weeks, they will present a show in the Breaking arts festival. In spite of communication problems and difficulties in agreeing how to express flamenco, the troop must succeed in understanding each other and their aspirations, to create an harmonious show.

Flamenco Dragons raises the profile of Zhen Zhao. This young choreographer will be the driving force at the centre of the creative process of the troop. She will have to resolve artistic debate between fervent defenders of « pure » flamenco (Kiko, Jose Perez) and  crossover (Emilio, Carolane et Nan). Zhen Zao will tell us about her history, culture and  the influence of her travels in Europe..

« Flamenco Dragons » records testimonies of each participant on their experience of China , their personal involvement in the show and their  vision of flamenco art. After the last performance, Zhen Zhao proposes to take a journey through her homeland, Hunan, to present the show fusing modernity and tradition.

Aims of the Project:

-       Report the process of creating a multicultural show.

-       Determine the ability to reach a high degree of unity and harmony.

-       Challenge the deep cultural gap between flamenco and Chinese music.

The fervour to Flamenco from Spain…

We intend to report of the commitment of these artistes and of their intense devotion to flamenco. Far away of their families, deprived of their daily comfort, exiled in a 10 millions inhabitants megapolis, they accepted this adventure. Carolane, Jose and Kiko never realized such a journey.

We wonder why Chinese to day are so strongly attracted by the andalusian culture. Is it a simple interest for an exotic folklore? A kind of fashion? Or something more profound? This new and suprising craze perhaps allows the Chinese people to express the enjoyement of liberation after so many years under the yoke. As for the gypsy culture, there may be a desire to sing the distress of uprooted migrants. During the eighties and nineties, ten millions of Chinese migrated from Hunan to Guangzhou.

« Flamenco Dragons » suggest analizing the personality of Zhen Zhao. The Small Pearl of Hunan is a traveller. She considers herself as a “river” between Europe and Asia. Why did she approach the latin culture? Why does her flamenco arouses such a pure emotion in spite of the cultural and geographical distance? What do Chinese and Gypsy cultures have in common? Zhen Zhao designs the show as she was writing her autobiography. While directing actors from different continents, she reveals her simultaneous East and West culture.

We will try to show the identical variety and subtlety of Zhen’desires. While devoted to her traditional art, she proves, as a globetrotter and world citizen, her open-mindedness and taste for interbreeding. Zhen Zhao embodies the contradictions of today: the willing to marry modern and traditional values.

Flamenco Fusion: an art of cross-culturalism

Which are the artistic and human issues intervening in the crossing process between flamenco puro and flamenco fusion?

The Flamenco dance appears in Andalusia in the 15th century. Elevated at its highest expression by the Gypsies of Andalusia, it extols the fundamental cohesion of the group. Moving from the family circle to the stage modified the flamenco: foreign instruments like flute, piano, cajon were introduced and rythms of the American music (rap, hip-hop, techno, jazz) brought their influence. Today, fervent defenders of flamenco puro lament the passing of authenticity in the expression of gypsy songs and dances.

The trailer of « FLAMENCO DRAGONS »

To show a preview of the documentary, we organized a meeting of  Kiko and Carolane in a spiritual place, a Buddhist temple in the Puy-de-Dôme. The two artistes approach flamenco in different ways. Kiko learned it within his family. Carolane went to Seville to study flamenco. The documentary will show how these different perceptions come together, to translate flamenco “puro” to flamenco fusion.

The funds will serve in filming and. editing.

Previous counterpart + a dedicated DVD of the documentary

Previous counterpart + a souvenir gift from China (may be a Chinese pyjama?)

Previous counterpart + inscription of the name of your association or company in the credits list, on the DVD box and on all project documents.

Previous counterpart + inscription of the name of your association or company in the credits list, on the DVD box and on all project documents.