Help finance this film to have an euphoric immersion into the Notting Hill Carnival : the 2nd BIGGEST CARNIVAL IN THE WORLD after Rio. 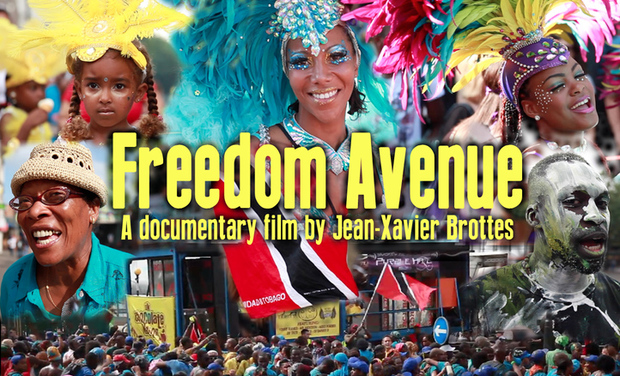 I appeal to you to help create the documentary film « Freedom Avenue » that we start producing at the end of August 2014 and during several months (we produced the first images in August 2013).

Your support will provide help to finish shooting, edit the film, to manage colour graduating and image quality as well as sound design in order for the film to participate in film festivals or be submitted to TV channels.

Summer is coming to an end but the air is still hot in the British capital. In the west part of the city, the upperscale Notting Hill neighbourhood that’s usually very peaceful seems agitated this morning. A few shopkeepers are bordering their shop windows, residents are decorating their homes with Caribbean colours that contrast against the white house fronts. The smell of barbecue is beginning to spread in the streets. Several jerk spice chicken, whistle and flag sellers are improvising makeshift stands along Ladbroke Grove Avenue. From their steps, residents observe the streets being gradually filled by a crowd from all around the world.

How is it possible for a carnival originating in the Caribbean to have a worldwide resonance in the chic Notting Hill neighbourhood  in London?

As has been the case for the last 50 years, the city of London is about to welcome over 1 million people for the 2nd biggest carnival in the world after Rio : The Notting Hill Carnival. In the honor of the afro-caribbean culture from the West Indies. During 3 days, communities that are mainly Jamaican, Trinidadian, Saint Lucian, Grenadian, from England and around the world, proudly show off their identity behind music trucks on soca rhythms, reggae, ragga and drum’n’bass beats.

Freed from inhibition and carried by the music, every band’s bodies sway and unleash, completely assuming curves and imperfections. Adults, old men and women, children, police officers and all colours of skin intermingle. Friendliness of ones and others encourages to let oneself go, and people take turns in posing before amused photographers. Colourful costumes, feathers, chaffs, high heels for some people, colourful T-shirts, mini-shorts, sneakers for others, each participant is spectacular.

A continuation of cultural traditions to reject racist oppressions

The Notting Hill Carnival reflects the continuation of a cultural Trinidadian tradition, symbol of their spiritual beliefs and the struggle against slavery. The symbolism of this event is magnified by the location where it takes place. It bears the mark of the 1958 Notting Hill race riots, during which some white people violently rejected Caribbean immigrants who lived in the neighbourhood.

The carnaval was initiated in 1959 by a local Notting Hill resident who wished to bring the communities closer together. She organized a Caribbean steel band meeting. This competition kicks off the carnival on the Saturday evening. The following morning, the parade begins at 5 am with the « J’ouvert Morning » as the slaves did at the time to avoid their slave masters. They covered themselves with mud to keep off demons, imitating and mockinging their masters’ behavior. Today, the mud has been replaced by chocolate and paint, and the slave masters are for example represented by judge costumes to symbolize the justice they never got. Tradition is transmitted from the earliset age as the rest of this first day is for children and then for teenagers who continue the parade. The adults take possession of the streets on the Monday for the last day.

In this gathering of people there is a strong sense of communion and an openhearted joy of being together. People enjoy approaching each other’s bodies, sometimes in traditional dances with their hips pushed back, called « whining ». The packed crowd transforms during the day into a true procession where flags are proudly carried, and where the bass rhythm and the lyrics sometimes create a state of trance.

THE CHALLENGE OF THE FILM :

To demonstrate that it is not only a popular success, the carnival is a social success thanks to its capacity to bring communities closer together despite a historic context of opposition.

The film will depict the fervor surrounding this carnival by showing :

- The beauty of the parade through the mix of costumes, skintones and all forms of body shapes, evocative music and appetizing aromas

- Identity affirmation and a sense of freedom for participants that continue the trinidadian cultural traditions of their ancestors and their parents too, sometimes victims of racist oppressions in Notting Hill

- The cultural enrichment shared by non-Caribbean participants, the crowd gets caught up by strong emotions, but also police officers that often let themselves get brought into the parade by the crowd.

THE CHARACTERS IN THE FILM :

VELMA, 80 years old and originally from Trinidad, has been a resident on Ladbroke Grove since the 1950’s, she will help us relive the tensions between the communities with emotion, the Notting Hill Riots as well as the birth of the carnival. Velma is featured troughout the film, sharing her wisdom and consideration.

LADBROKE GROVE : the film will take place on this appealing avenue with its huge Victorian houses, small grocery shops, bars, it’s an ideal British setting that contrasts with the Carnival’s multicultural intermingling.

On this avenue we will get to know our main characters, individual participants of the carnival that explain the significance of this event for them and how they got ready for the show, and we will observe how they experience this unique event. Here it is some nice characteres meeted in 2103 :

WHY THIS DOCUMENTARY FILM ?

In 2009 I was in London for a few days. Around a corner, attracted by a moving crowd and an upbeat sound, I discovered the parade. Excited by the atmosphere, I pushed my way into the packed crowd in order to get inside the heart of the show. It’s difficult to explain how I felt but there was a mix of curiosity, excitement and wellbeing experiencing this amazing event that is a symbol of a rich cultural mix. A sharing that overcomes all racial and physical prejudice.

In 2013 I decided to go back to capture the intense emotions I felt the first time, this time with my camera. I go back alone, with my 5D. Once there, I had to overcome the language difficulties (since I’m French) to get interviews and break through the securtiy barriers to get closer to the parade.

In 2014 I’m going to go back again to make the film with your support !

PRECONCEPTIONS BEFORE MAKING THE FILM

Inside. At the heart of. Among. I want to get into the heart of the show to film the costumes, the looks, the smiles and to meet characters, to feel the vibrations of the speakers in my chest, to accept the risk of being jostled by the crowd whilst capturing the emotions and film the preparations during several days.

The money collected will finance :

Altogether a total budget of £ 3 963 (this amount represents the minimum sum needed to make the movie).

If we exceed the target amount the film will only be better : more workdays with the professionals and promotion with photos, posters, DVD’s, etc.

£8 : A huge thanks for your help ! + Your name in the film credits + A special thank you on the Facebook page « The Notting Hill movie »

£16 : Previous couterparties + 1 enlarged photo 8x11inches printing on HD paper, photo of your choice taken from the movie and available on the Facebook page « The Notting Hill movie » or thenottinghillcarnival-movie.com

£56 : Previous couterparties + Assisting during part of the editing or colour grading or sound designing OR if you prefer 5 other enlarged photos of your choice taken from the movie

£80 : Previous couterparties + A photo shoot of a person of your choice during 1h outdoors, the location is decided upon together (London or nearby towns, Paris, Lyon, Grenoble), made by the film director, 20 photos sent to you by e-mail

£160 : Previous couterparties + A video-portrait with an interview of a person of your choice, a 1 hour shoot made by the film director, the location is decided upon together (London or nearby towns, Paris, Lyon, Grenoble)

£400 : Previous couterparties + The previous video-portrait with editing to create a short 3-minute film

£800 : Previous couterparties + your name and logo on the DVD and highlighting in the film credits