Come on to explore the music scene of Winnipeg (Manitoba) and discover a pretty unknown part of the French-speaking world. 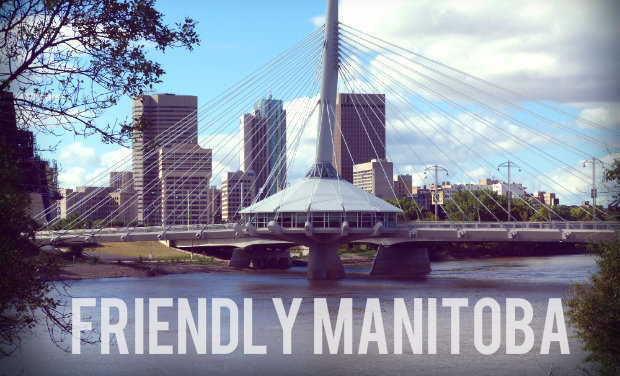 Winnipeg is the capital city of Manitoba, is the centre of Canada. Alexandre Mélot and his mates will explore this province to meet the French-speaking community there, a very dynamic but not that..., through its music bands and festivals.

Director William Sineux, French by birth and Canadian by heart, completely felt in love with Manitoba and this community. His dream: going back there with a complete AV production team, to make the whole world discover this very sensitive population, with unlimited creativity and moving solidarity. All that is present in their very musical field.

Backpacked explorer Alexandre Mélot lands at Winnipeg International Airport, Manitoba. After a connection by Toronto and a 16-hour journey, he is now ready to discover a still unexplored part of the French-speaking community.

Discovered and founded by the French in the 18th Century, Manitoba was first a 100% French-speaking province. But successive migrations of English-speaking people then made the French be a minority language, to a point when the Federal Government of Canada decided to abolish lingual duality to sole English, in a complete denial of the French-speaking history of the proving.

Decades of fightings and lawsuits were necessary to re-establish the official status French language in 1979. Today, 50,000 inhabitants speak French as their mother-tongue in Manitoba.

Indeed, only 5% of the population of Manitoba speak French. This community has then to struggle every day agains the English assimilation of their culture.

But this struggle feeds its very wealthy and dynamic cultural landscape, just like a pearl hidden in the Canadian Far West... that we are going to discover with you.

Meeting local musicians, their songs and and inspiration sources will be the main guideline of Alexandre’s exploration of the French language there.

As a human and musical story, Friendly Manitoba will then explore the heart of an isolated community, whose members must sing to make sure they will be heard, go on stage to be seen and finally live to make sure they survive.

Friendly Manitoba is a humanist documentary, which will adress all the fans of Molière’s language, in a moving and funny way, through musical discoveries.

Alexandre will discover this community by meeting musicians from Manitoba. Wonderful musicians. According to some people, winters are so rude there (about -40°F) that music is the only escape gate for creative youngsters. As a a result of that, every one plays music there, and professional bands keep growing and going abroad... including Europe!

Let's mention some of them:

Oh My Darling is a female quartet composed of a violin, a banjo, a double bass and a guitar, already well-known in Europe thanks to three albums. Songs are sometimes in English, sometimes in French.

Don’t forget the folk accents of talented Claire Morrison the wonderful voice of the Chic Gamines and the craziness of the Red Moon Road, which all offer a lovely mix of French and English songs.

At last, the swingy F-Holes and jazzy Collages-à-trois will guide us all along the trip.

But the list is still to be completed... Come and discover them with us!

Alexandre Mélot is the Explorer

Those who already know him will tell you that he is homesick as soon as he’s going further than 10 miles ahead from the Western borrows of Paris... But it’s him who will take his bagpack to go and meet Manitobans. As a clever and cultured student, he’s got all the qualities to explore every part of this incredible region, and make sure that you will know everything about Franco-Manitobans.

William Sineux is the Director

Our young director, fond of AV Production, come back to Manitoba that he loves. When he was living there working for La Liberté, the French weekly newspaper of Winnipeg for one year. There he created La Liberté Mic, which is today the reference musical TV Show to know everyting about the musical landscape in Manitoba. He is the one anyone needs to go and explore to unknown places...

Paul de Gromard is the DoP

As a talented DoP (he’s even got an IMDB page), Paul leaves cinema studios to go with us. His experience and his very special ... will make Friendly Manitoba a pearl of aesthetism, to make you dream and travel with us.

Valentin Fluteau is the Producer

Officially producer, the team is sometimes giving him some nicknames (they won’t be released in a public area). Just graduated from EDHEC (a French business school) and truly passionated by everything related to AV Production and the media, he will make the most for you, dear contributors and donators, to be congratulated following your engagement.

(about 7$) You'll get a free access to the documentary on the VOD platform.

(about 13$) Your name will be displayed on the credits as a "co-producer" (and the previous reward).

(about 20$) You'll receive a daily newsletter reporting the shooting of the movie (and previous rewards).

(about 33$) You'll receive the CD of the original soundtrack (and previous rewards).

(about 54$) You'll receive the DVD of the movie (and previous rewards).

(about 67$) You'll receive a personalized postcard, directly from the shooting in Manitoba (and previous rewards).

(about 87$) You'll receive an autographed CD of one the bands interviewed (and previous rewards).

(about 135$) EXPLORER PACK. You'll receive the whole equipment of the shooting (T-shirt and multipocket vest), and all the previous rewards.

(about 270$) MEETING PACK. You'll receive all the rewards while meeting the team.

(about 271$) DINNER PACK. You'll receive all the rewards during a dinner with Alexandre Mélot, the explorer.

(about 472$) ARTIST PACK. You'll get the occasion to meet some artists of the documentary (and previous rewards).

(about 1350$) LIVE CONCERT PACK. One of the groups will come for a private live concert, just for you!