What if we co-produced a documentary film with a strong social utility for children’s rights? The fight goes on www.ghostchildren.org! 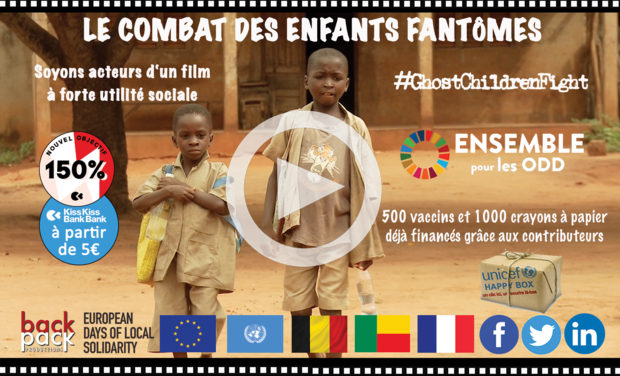 In a multi-stakeholder momentum where any contribution is useful, citizens, local governments civil society and the private sector gather to support the production of a 52' documentary film with a strong social utility about ghost children donating 5% of the funds raised to UNICEF to contribute to children immediate needs on the ground.

In 45 days, we reached 144% of our first target by bringing together 106 individuals and organizations, making sure the project will become reality while financing 7 UNICEF Happy Boxes. Today the film is in the final stages of editing, and the fight goes on www.ghostchildren.org!

Praised for its impact and a particularly replicable character, the birth registration partnership led by the cities of Roeselare (Belgium) and Dogbo (Benin) has been elected last year "best decentralised cooperation project" by a jury of specialists from the European Union and the United Nations (PLATFORMAwards initiative).

The cooperation partnership that became an example for the world offers a great story perfectly translated into video. Launching that #GhostChildrenFight campaign, it is interesting to introduce a collective conversation on the substantive issues mentioned in the film. How to eradicate the ghost children problem? What are the reasons for an endemic non-registration of births? What are the best tools to deal with the phenomenon and how to articulate them? Should the civil state matters be only dealt by central governments ?

The documentary film will be a unique communication tool to raise awareness of the wider audience about human rights, the right to identity,  international solidarity, decentralized cooperation and the Sustainable Development Goals (SDGs).

"Ensuring legal identity for all, including birth registration" is one of the 17 SDGs defined by the United Nations, for which local and regional authorities have an important role to play.

Today 230 million children don't have a birth certificate worldwide. Without a legal existence and associated rights, these "ghost children" are excluded from society and can easily become the prey of the worst abuses. To face this situation, the mayor of Dogbo in Benin has signed a birth registration cooperation agreement with his Belgian counterpart in Roeselare. Strong actions are being taken on equipment, recruitment, training and awareness. On a mission to Dogbo, the Belgian delegation must face cultural differences and local traditions to offer the project a full success.

September 2018. Social networks relay a call for proposals for a video production project launched by the Council of European Municipalities and Regions (CEMR), whose PLATFORMAwards initiative aims to reward excellence in action cities and regions.

Among 42 decentralized cooperation projects run by 75 local governments from 30 countries, a jury of officials and experts from the European Union and the United Nations unanimously awarded the first prize to the cities of Roeselare (Belgium) of Dogbo (Benin ) for their joint birth registration program.

With almost 40% of births unregistered, Benin is one of the most affected countries in the world by the "ghost children" issue, which affects nearly 230 million children worldwide. Deprived of a birth certificate, these children have no legal existence and can not claim any right. Excluded from society, they can even become the target of the worst abuses: school drop-out, child labor, forced marriage, prostitution, child soldiers ...

To eradicate the ghost children in Dogbo, the mayor of this 100,000 inhabitants Beninese city  has forged with his Belgian counterpart of Roeselare a cooperation partnership which is so much effective that its success starts to reason throughout Africa.

PRESENTATION OF THE STRUCTURE LEADING THE PROJECT

Founded in 2009, Backpack Productions is an independent audiovisual production company based in Bordeaux, France, specialized in reportages and documentaries highlighting contrasts of a connected world.

With the CNC (French National Cinema Center) support or in co-production with France Télévisions, Backpack films have been acclaimed by critics and rewarded with prestigious awards at international films festivals.

In an approach of corporate social responsibility and a strong sensitivity to the international solidarity and local development challenges, Backpack recently developed an expertise on communication projects related to the local authorities international cooperation projects:

Backpack was pleased to quickly get the support of the European Union through the CEMR and UNICEF, through the availability of the video rushes and a key interview of an expert on the ground. We also gathered a tailor-made team with an experienced director who already shot several documentaries with a cameraman who knows Africa as well. Versatile and sensitive to cooperation issues, the editor already knows the rushes since he successfully mounted the short video report, whose trailer has been viewed more than 360,000 views on social networks.

The film is now targeting  to reach the wider audience with film festivals participations on 5 continents with an associated international TV distribution. A rigorous project management and a constant concern for quality will allow the best technical team to make the most of adapted means according to the campaign collected final amount.

For that and to build the best film, we now hope that many citizens, local governments, associations and institutions will join the #GhostChildrenFight campaign launched as part of the European Days of Local Solidarity.

Today, the project already reached an advanced production stage with with minimal risk. The shooting has already taken place, the narrative structure is built, the editing has progressed well with a 45 ' rough cut.

Post-production teams and providers have been identified and selected for a well-budgeted budget backed by a strong financing plan. We now need to offer the film the best success with that dedicated #GhostChildrenFight campaign,

A minimum budget of 5.000 € will  guarantee the post-production finalization (editing, mixing), the "masters" editing and the DVD releases, with a premiere and the rewards production due to contributors!

Reaching the 2nd level of 10,000 € would strengthen the post-production for a more qualitative film, including editing, sound editing, calibration, and original music. Reaching the 3rd level of € 15,000 would allow to register the film to targeted international film festivals on 5 continents, signing the full success of our crowdfunding campaign.

For us it seems natural that this participatory momentum also materially contributes to targeted actions for children's rights.

5% of the contributions will be donated to UNICEF to carry out actions on the ground, in particular financing some "Health" and "Education" Happy Box.

The crowdfunding campaign offers 13 levels of contribution starting from € 5 including the following rewards:

Through a dedicated level of contribution, local governments, associations, companies, foundations and institutions can make the most of the film as a communication tool:

NOTE OF INTENT OF THE FILM DIRECTOR

Having worked for 15 years on communication projects dealing with decentralized cooperation, I know how to meet this production challenge which is also an editorial matter. I assume the ambition to tint the film of the richness of a complex ecosystem highlighting a beautiful story with charismatic characters learning to know each other in our so interdependent world.

The scenario plunges us into the heart of Benin, cradle of voodoo beliefs that is interesting to contrast with Belgium as a host country of the European institutions. When the Roeselare hospital looks brand new, Dogbo's maternity ward is devoid of any means. When Belgian school classes seem to host a limited number of students, Dogbo classes are literally overcrowded. These material questions do not seem to touch the enthusiasm of characters for whom comfort often seems a point of detail. At the rate of back and forth between Europe and Africa, the strong differences offered by these territories will finally prove to be very complementary.

From a narrative point of view, I am happy avoid any voice over for a limited number of simple title cards, reinforcing the weight of the words to illustrate beautiful images. The film soundtrack will include the title "Mutoto Kwanza" ("Children First") performed by the Beninese singer Angélique Kidjo, "first African diva" according to The Time and one of the 10 most influential women in Africa for The Guardian. We can only be honored that Angelique Kidjo, who is also UNICEF's international ambassador, has offered the Ghost Children Fight the synchronizing rights for her song, which can be considered in the film as the most beautiful hymn for universal children rights.

If the film is an ode to decentralized cooperation, it also questions the compatibility of interactions between different cultures in a strong traditions context. A story of trials, doubts, resistance and especially love, where the human being is questioned in the depths of his openness.

In Benin and Belgium, I met charismatic characters from whom I naturally obtained rich and authentic sequences. As examples I think about the interview (seen at the beginning of the teaser) of the UNICEF representative in the unmapped district of Ladji that could also be called "ghost" zone (more commonly known as the slum of Cotonou), or the sequence with the king of Dogbo followed by the the voodoo ceremony which reminds the reality of the ground.

By the richness of the addressed issues (childhood, education, poverty, decentralization, international cooperation, Sustainable Development Goals), the film has great potential as a communication tool for international meetings, where a screening could be followed by questions-answers sessions or debates. Of course I am thinking of the next Africa-France summit to be held in Bordeaux in June 2020 and which could host an official screening of the film.

Today, all the elements that make for a successful quality film seem well together. Thank you for the time you have spent reading this page and which I hope will translate into your support.

The above + the DVD of the film

The above + 2 invitations to the film premiere or to any screening (already planned in Paris, Bordeaux or Brussels - at the contributor's choice) + the film poster (A3 format) with a personalized word of thanks from the film director + the film tote-bag

The above + 4 film mugs + 1 UNICEF insulated bottle + 1 coffee (or tea) with the film director on the premiere or any screening (at the contributors choice : Paris, Bordeaux or Brussels)

The name of organization or local government on the film end credits ("with the special support of") + a film preview before the editing finalizing, allowing you to give your opinion on what works or not and how we could improve the film (you take part in the film making) + 4 VIP invitations at the film premiere (or any screening in Paris, Bordeaux or Brussels) + a working (or pleasure) lunch with the film director (or producer) to explore new horizons

The above + your private screening (broadcast rights and a 1h Q&A session with the film director) on your event and/or with your community + a personalized thanks word from the director during the film presentation speech for the premiere and all screenings (already planned in Paris, Bordeaux or Brussels)