Are you ready to rock and boogie? The third album of June Caravel will do just that!

Are you all ready for a new musical adventure ? This time it will be under the sign of rock'n'roll, boogie and blues ! And in this adventure, YOU are the essential ingredient! Because without YOU, there won't be any album!

For those who don't know me, I am June Caravel, singer-songwriter, pianist and bassist from Paris and I rock'n'roll, blues and boogie. But not only... Let's do a little flash back to explain how...

Not a lot of people know it but I've been a rock'n'roll dancer since I'm 12, when my sports teacher, Jean Rizo, taught the entire class how to dance it. I even was a French acrobatic rock champion at 15 (the proof with the cup I won below).

At 18 years old I got the equivalent of a grade A (20/20 in French notation) at the Baccalauréat, the final French exam at High School. So rock'n'roll, blues and boogie-woogie music have been part of my life for a while now...

Then I flirted with soul music...

I admit I have let rock'n'roll down after High school... Maybe because boys never wanted to dance it :(... I also developped an interest in soul music and started composing soul-pop songs under the artist name T-ka. And in 2008, thanks to the first ever crowdfunding website Sellaband.com (well before Kisskissbankbank existed) and to 684 generous investors the world over, - YOU - , 50,000$ were gathered and allowed me to record my first album "And maybe a tree will rise out of me..." in Weed, California.

Without your help, I could have never lived this American Dream and do all the concerts that followed (The Paradiso in Amsterdam, Paard von Troje at The Hague, the Enghien Jazz Festival, the Solidays, opening for Malia, Maceo Parker, Incognito, Tower of Power, Robin Thicke, etc, etc.). I am eternally grateful to you for that!

Then I flirted with A Capppella...

After this album I moved to London in 2009 and changed my artist name. I became June Caravel. After seeing Bobby McFerrin & Richard Bona live, I discovered the limitless possibilities offered by the human voice and decided to try my hand at A Cappella singing. I started experimenting new songs with my loop pedal and I decided to go Busking in Australia to promote the album The A Cappella Sessions.

My goal: only survive off donations people give her in the street while singing. Not only did I survive 2 months but I also filmed and produced an online series in the summer 2012.

Then I went to live in Hanover (Germany) where the album received the kre(h)tiv prize of the city. As for the video London Song, it was chronicled on the BBC, appeared on the NME and was video of the week on Visit London.

But the rock'n'roll virus came back!

In 2012 just before leaving London, I had started to write the synopsis of a rock'n'roll musical in between Grease and Dirty Dancing: the story of a yound hard-rocker who falls in love with a rock'n'roll and boogie dancer and lhas to learn how to dance to conquer her heart... But I left it there and did nothing with it in the end... It's also in London that I took bass lessons from 2010 to 2012... And that I seriously started composing on it since 2014.

That's in 2014 that I went to several rock and boogie festivals especially the Summer Jamboree in Senigallia, Italy. It's on its beach in between 2 dances that the idea of the first song came: "That's Senigallia". Then I started thinking about doing a rock'n'roll album and when I looked for themes and lyrics for songs, I remebered the musical I had started writing and it became very simple to write the songs has its themes were dictated by the story...

The 3rd Rock-Boogie-Blues album Project and the Musical

Ever since, I wrote 20 rock'n'roll, boogie and blues songs that I've recorded as demos. And I am currently finishing writing the first draft of the musical that goes with it... And now I would like to give back to this music everything it gave to me and give you an album that makes you jump on your own two feet and dance! And also give you an album that will be the basis to this Musical I'm writing!

I have gathered a team of musicians and a producer around me to record the album and thanks to you we could be recording as soon as July 2016 and delivering the digital version in September 2016 and the CD version in October 2016! It will have 12 to 13 original songs that we will record at Studio Audiolane, next to Paris under the supervision of Fred Scamps my long time pianist who will also be the arranger of the album.

But in order to do that I will need YOUR support!

A lot of you ask me when I will do my next concert... Well, without an album you can't show what you can do to programmers and thus be programmed. Same for the promotion, without an album, medias have no reason to talk about you. Producing this album is thus the essential stepstone for YOU to be able to see me perform it live and for YOU to hear about it on TV, Radio, Press and the Internet. And what a greater satisfaction then to be able to say that YOU are the producer of the album?

All donations are welcome little or big! Every penny counts to make the project come to fruition. And don't forget that if the collect doesn't reach 15.000€ then what you have invested will be given back to you. But if the collect is a success, then the album will be recorded thanks to YOU!

To make you hear what the album will sound like, I will unveil every week a song of the album that I will be performing live on my bass...

And here's the 3rd excerpt: What a style!

And here's the 4th excerpt: Girls don't do that!

Here's the 7th excerpt: The best dancer in town!

Here's the 8th excerpt: When my girl is in love with the wrong man

While the album is being made, I will keep you informed of its development on kisskissbankbank, but also through my newsletter, my blog, Facebook and Twitter. and of course, each of you will get its counterpart. If you have any questins, you can ask them here or via the social networks!

Thanks from the bottom of my heart for contributing!

- Fees for the arranger, the sound engineer, the pre-production, the mixing : 6.474€

That's the minimum to do the album.

We can make an album, a music video and hire a press officer to promote the album during 3 months on the radio, TV, press and Internet (4.000€)  and I can rent a venue to do an official album release and invite you all (6.000€ for the venue, the sound & lights engineers, the filming of the concert).

We can make an album, a music video, hire a press officer, do an official album release and shoot a second or even a third music video... And pay my musicians on promo tours.

All the remaining contributions would allow to pay for:

It's hard to crunch the numbers on that one, but I was told that only to do one run of a musical, it could amount up to 100.000€. Because you must pay all the actors every day for the rehearsals until the musical is ready and also rent a theater and rehearse there to make sure stage set and costumes are right.  So depending on the amont we reach, it will at least serve to start the project. Maybe we could do an ultra reduced version of the project but that would give producers the will to do more.... But if there's enough, it wouldn't be a concert release but the musical you would see for the release of the album! 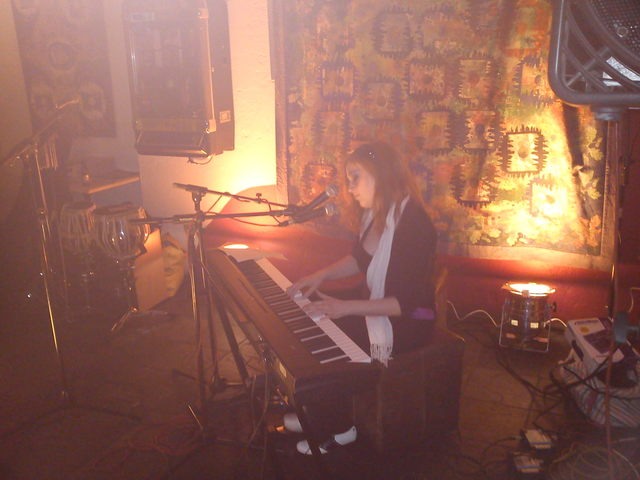 THE RECORDING STUDIO PACKAGE - 1 day in the recording studio in the suburb of Paris with the team of musicians and June Caravel. Lunch will be offered and you will be able to witness the recording of the album with your own eyes. The recording should take place between the 4th and 21st July (dates to be confirmed), so you have to make sure you can make yourself available (also on weekdays) - No transport cost will be covered. + THE ALBUM IN CD VERSION SIGNED TO YOUR NAME + your name in the thank you page on the website www.junecaravel.com

1 DAY WITH JUNE CARAVEL PACKAGE - 1 whole day (from 10am to 6pm) with June Caravel in Paris or its suburb (Only in Paris or its suburb, transport costs not included outside of this area) with singing, bass piano or/and rock'n'roll dancing lessons. You choose the program. I will also prepare a vegan lunch + THE ALBUM IN CD VERSION SIGNED TO YOUR NAME + your name in the thank you page on the website www.junecaravel.com