A beautiful antique fountain on which we work for years. We would like to give back its original splendor. Are you one of us, too? 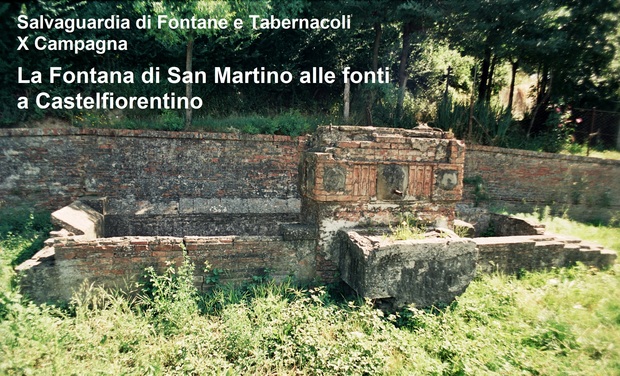 Objective: to restore and open the Fountain by June 2016!

Since 10 years we study and restore fountains and the Tabernacles and other cultural heritage and landscape in Italy with the belief that awareness, engage and work for their protection leads to conservation of their beauty. Because you should never say "it's too late". Because you can always write another happy recovery chapter of our cultural heritage.

We intend to use the collect entirely to the restoration (see details), the goal is fixed at 9,000 euro about a half of the amount needed for interventions forseen in the project. Support us, with your help, the fountain will sure rise again! Join this fundrising

The fountain of San Martino was committed by Ferdinand III Habsburg-Lorraine, Grand Duke of Tuscany, and was inaugurate in the year 1817. Situated just south of Castelfiorentino, from the beginning was one of the most important infrastructures for travelers coming from or going to Rome. Just north of Castelfiorentino it existed a fountain very similar to this (now lost) situated a few dozen meters from a staging post for changing horses and accommodation of travelers.   The fountain in ancien regime was a public work of primary importance and as such had its own epigraph in plate that celebrated the sovereign who wanted her: the Grand Duke in his political impetus to develop the trade and industry of his realm, in the heydays of the Restoration.

Celebrating epigraph of the fountain anno 1817 (transcription published in 1918)

The fountain was undergone by frequent maintenance activity until the raise of the Italian Kingdom. This cares were performed to undermine the productive capabilities of the fountain. The water of the fountain, was reputed as very light and of high drink quality, very suitable for men and animal use as well, as being the only really source of drinking water for the whole castle and village of Castelfiorentino. Was always used for suppling all the crews and animals in transit on the old via Romana and via Volterrana. With the advent of a modern public aqueduct at the beginning of the twentieth century the fountain underwent a slow but inexorable decline, so much so that until about 20 years ago, the fountain was a place abandoned and overgrown by wild vegetation and rubbish of all kinds.

A picture of the fountain dated anno 1933

Since 2007 the association Eta Beta Onlus took care of the maintenance of the site, and was able to produce a project of restoration and, according to the municipality, had initiated the restoration of the fountain itself and of the surrounding area.

In 2008 was decided to rebuild the front pavement of the fountain, which probably did not receive care from the second half of the nineteenth century (!)

Washing floors were restored in 2009

In 2010 our attention moved ito the floor of the main basin of the fountain that had been demolished in the last years of the twentieth century due to the negligence of the company in charge of the work. Followed uninterruptedly maintenance activities ordinary which allowed to stabilize the conditions of the artifact waiting for its final restoration.

The project has received support and awards from IBO, SCI and of the Earthwatch Instutute of Boston (Mass.) U.S.A.

The restoration was blocked by the lack of expensive stone materials as columns, riliefs and expecial bricks and decorations no more in production, added to logistic difficulties encountered in the past to bring water from the spring back to its fountain: we needed to rebuild a hundred fifty meters circa of acqueduct.

Hence the need to raise funds to complete this important restoration.

Photo of some members of our association. Betty kept here the picture!

A campaign to safeguard is primarily a social event: many people with various abilities are involved for a common goal (restoration, census, maintenance, fundraising or awareness, or all or some of these actions). To the date of today many italian people have participated in the campaigns neverthless French citizens, Belgians, British, Dutch, American, Spanish, Australians, Germans, Czechs, Slovaks, Poles, Russians, Irish, Slovenians, Croats, and Turks.

Everyone was able to contribute due to its skills and possibilities. As the donor may also be interested in becoming one of our volunteers discover how and when subscribing on our mailing list.

To reach the goal of the fundraising is really one keystone for the fountain of San Martino.

The funds that would be raised will come to complete the restoration of the fountain it self.

In particular, funds will be used to purchase:

- Stone materials needed (high relief, the mouth of the fountain, small columns and floors, angulars intravertine) and put them in place EUR 9,000

But another operations are needed...

so if the collection will exceed the minimum threshold of EUR 9,000 here under is

HOW WE WILL USE THE FUNDS IN SURPLUS:

- to let make terracotta bricks no longer in production and use, much and much  longer than the current ones and with special decorations -kind peacock feather. Thees are the only suitable to end the elements of the fountain destroyed or ruined by time. EUR 1,500

- to complete the pipeline which will provide water to the fountain, from the original source to the outlet pipe, through the re-trenching of a water-pipe for a distance of about 150 meters separating the source from the fountain EUR 5,000

- to complete the left wing of the pavement in front of the fountain, still missing the balusters which in origin protected the pavement and the fountain. Plus some protection from automotive traffic on the contiguous road. EUR 1,500

- to organize a restoration camp that allows international students and workers active in the field of restoration and interpretation of cultural heritage to carry on an  interesting experince, on a really unique site

Exceed the target of 9,000 EUR of this fundrisind would be great, and affordable.

But we remain on the ground. Is up to you to give us a couple of wings!