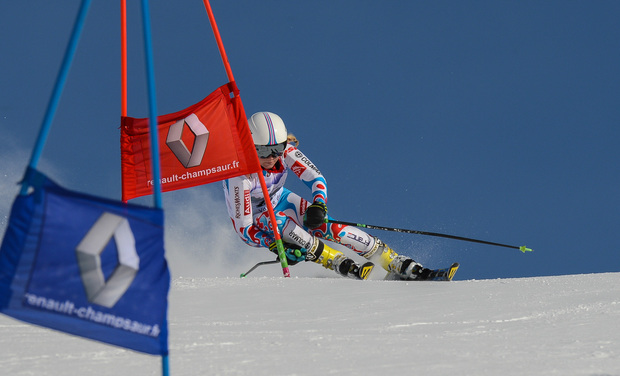 My name is Charlotte ANTONSEN, I was born on May 5th, 1997 in Saint-Germain En Laye (Yvelines).

I started skiing at the age of 4, and since this day, my passsion has never stopped growing.

I started in the Jura Mountains close to Geneva, in a small ski station called Crozet-Lelex. I integrated the Ferney Ski Club when I was 6, and then moved on to the Departemental Team (01 AIN) and subsequently the Regional Team Massif Jurassien (Ain, Jura and Doubs).

I am now training in a private team called ORSATUS which is based in Meribel.

At the beginnig, in the Jura, I  became one of the best female skiers, and since 2010,  I am keeping my place as number 1 in the Jura Region.

At the end of middle school in 2012, I left home to join the Lycee in Moutiers to study  in Savoie to start a 4-year-baccalaureat by continuing the ski at a high level.

From then on, I was supervised by my ski coach, physical training coach and a mental coach throughout the whole year.

I passed my Scientific Baccalaureat with a mention in June 2016 !

I just joined the Universtity of Grenoble Alpes in the Language faculty with a status of a National High Level Athlete, wich allows me to continue the ski at a competitve level during my studies.

I also integrated the university ski team with whom I am  trainning physically during the week.

Night Trail in the hight of Grenoble with the team

My season is divided into several sections; from June to November, with with training sessions in all the Eropean glaciers but also in Sweden and the Southern Hemisphere (Argentina and Chile), which is essentially  to improve our technical skills.

Then from the end of November to the end of the winter season, we are based in Meribel and we are moving throughout all of Europe to be able to follow the different FIS circuits of international competitions.

Alpin skiing at a High Level calls for  an intense physical trainning in addition to skiing all year long !!

During last season, I had the chance to qualify for my first European Cup Race in the speed event because of my my good results in Super Giant Races at the beginning of the season.

This event helped me gain experience of the compition at is highest level and made me reallize that I did not want to stay put, but  keep on progressing further:

Unfortunnately, Alpine skiing costs a lot, and I am not financially dependant. It has become  too big a burden for my parents to support my skiing financially .

That's why I am asking you for some help.

My trainers and coaches are fully behind me and support me in trying to reach the highest level:

«Considerable progress has been made by Charlotte and her FIS ranking is alwas improving. She's really determined,  focused and in constant search of performance. She has the ambitions to achieve at the highest level and I sincerely believe that she has the capacity to achieve her objectives.»

« Charlotte knew how to evolve mentally, she's alwas diligent, motivated and professional in her work on the skis but also with the physical trainnig. With this complete qualities, in all the disciplines like in speed ( wich is unusual if we look at the other french athletes), I sincerely hope that she will find the financial help to achieve her objectives. Her season hasn't been awarded by big results, but her will to continue shows that she realized that her season didn't reflect her capacities; we remain constructive and motivated for the future.

I will accompany her with pleasure in her project, as she can integrate the National Team and be awarded at her just values »

The collect will serve to  finance a part or all my ski season, the budget can be divided into:

The collection of 3 000 Euros will allow me to fund a part of my career which is, above all, a human and sportive adventure.

Indeed, as you can see 30000 euros is well below under the real needs of a ski season, that's why I am asking for your GENEROSITY !

I really hope that your generosity will keep my dream alive.

Furtermore you have to know that sponsorship is tax-deductible! In france , you wil pay 65% less on you taxes.

You can  also follow my progresson the videos of my training and races that I will put on my youtube channel: https://www.youtube.com/channel/UC3Mug8KS1GCbk9gljGdSjpg