Mixed Up Everything - New Album!

New Album - Donate to save rock! 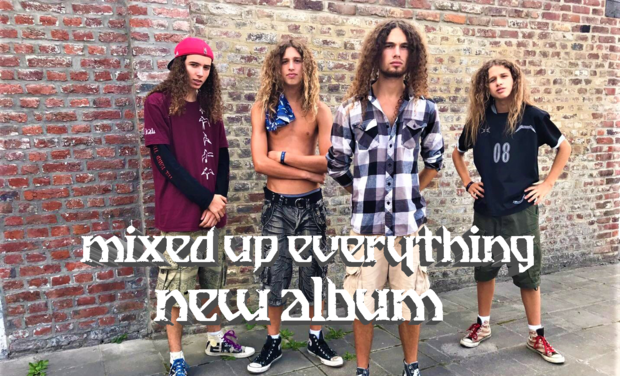 Mixed Up Everything - New Album!

Hey folks, Todd here, 20 years old and the guy behind the vocals and most of the lyrics, Kevin here 18 years of age and I’m the one who makes all that noise behind the drum kit and who’s shirtless most of the time, Blake here 16 years old who started on bass but fell in love with rhythm guitar and haven’t looked back since, and last but not least Koby 15 years old who finally can say that I’m taller and bigger than my left handed bass guitar 😊 (and FYI bass guitar is way cooler than the rhythm or any other guitar…)

We are four brothers from Melbourne, Australia also better known as the rock band: Mixed Up Everything. We have been playing together since we were babies, doing covers of our favourite bands in front of our parents, using Dad’s tennis racquets for guitars, and Kevin smashing and destroying Mum’s cushions and pillows as he used them for ‘drums’!! However, later on we discovered real instruments and we’ve been playing, composing and practicing until our fingers literally bleed!

We started on the streets of Melbourne, then we continued around the streets of Europe at some of the most awesome and famous landmarks, but we don’t want to be known as street musicians (cool as they are) and we don’t want be known as a cover band either (awesome as those covers can be) We want to be the biggest rock band in our own rights and with our own original material. That’s that!

As most of you know, and have been following our journey, we have been busy working really hard on our second album, after having recorded, released and extensively toured our debut album Ex Nihilo. We have been 'shopping' around and trying to find the best studio and team of producers to help us bring out the best of our labour of love. Finally, we settled for a studio in the small town of Namur, in Belgium. After visiting the studio and having a long meeting with the producer and sound engineer there, they estimate our project, the recording, mixing and mastering, would cost around 10.000 Euros.

Our first album we self financed it and it cost us around 8000 dollars. At that time, we were restricted by the lack of finances and it caused us to rush the process and now in hindsight we wish we had done several things differently (I guess every rock act, when asked years later, all wish they’d done things differently with their first record, so we’re in good company!) That being said, we’ve been able to save 2 to 3 thousand Euros ourselves and that leaves us 7.000 Euros short of reaching our goal. The money will go towards recording in the studio for 2 to 4 weeks, and toward the mixing, mastering, producing, art work design and the final printing of the CD’s (Yes, we will forever believe in physical copies of our albums. Always!)

To put it simply: We need your help in the form of 7.000 Euros, to make our second album possible. We cannot tell you how grateful we would be for anyone willing to donate!

For those of you who know us and have been following us for years, you know we are all about the music. For the ‘new arrivals’, we’d like to tell you that we have one and only one goal, and that is to be the biggest rock act out there. We are diligent students of music, from Beatles, Elvis and Hendrix, to Deep Purple, Dio and Sabbath, to Genesis, Tears for Fears and Duran Duran, to Temple of the Dog, Soundgarden, and Nirvana and all the way to Stone Sour, Shinedown and Foo Fighters. Sadly, the rock world (as we appreciate and value) has come to a grinding halt. Everything has become more modern and more electronic. Even the drum sound is no longer raw organic skins. It’s just muddled by computerised sounds and everyone sounds exactly like everyone else.

We don’t want to be just another “rock band” in 2019, no no, we want to keep the legacy of rock alive and keep the torch lit. Even if the radio and MTV think old fashion rock is no longer “relevant”.

That is why we looked for a studio that is going to support our passion and beliefs! We have found just that here in Belgium; a studio with a producer who appreciates the old fashion way of rock and we estimate spending about 20 days or more (depending on the finances, of course) in the studio to create that kick ass sound we’re after. We want to be as raw and organic as possible! We want that good old fashion 10-12 page art work CD booklet for our fans to hold in their hand. Something tangible that you can look through and study – just like we do with the thousands of CD’s that we have in our collection. We will forever keep on supporting the old record stores.

We are stoked at the songs and the sound we’ve come up with for this second album, and although we are very proud of our debut album Ex  Nihilo, we do not want to repeat and rush the process making the same rookie mistakes we made with our first album.  We want to take our time and deliver all our fans the very best.

We have no label behind us; and frankly we couldn’t give a rat’s ass about that. You! our fans, are our label because you are the ones helping us achieve our goals and our dreams. We hope you view this as a worthy cause and are able to join us in making this album a reality.  More grateful and appreciative we cannot be! Thank You All!

Oh, and last but not least, any excess over and above our asking quota, we would like to put toward either shooting a music video for our first single from our upcoming album or use it to create some sick looking t-shirts that you can proudly wear! Thanks again from us 4 brothers!