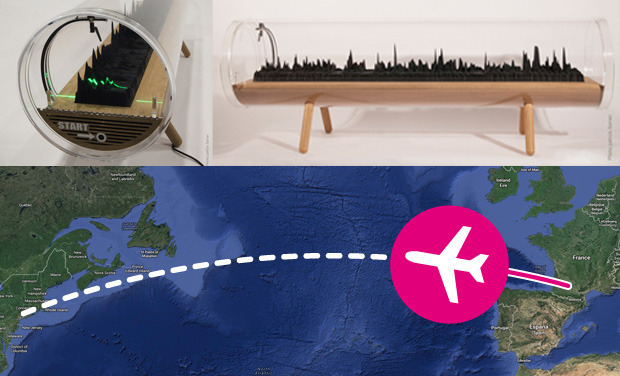 Help us ship the 3D voice sculpture “OBAMA Next Industrial Revolution” from France to New-York to present it at president Obama at the 3DPrintShow.

This work is a physical representation in 3D of Obama's voice.

The  Sculpteur de Voix (Voice Sculptor) Gilles Azzaro designed and created a 3D sculpture of the spectrogram of the voice of the president of the USA Barack Obama during his State Of The Union speech the 12th februrary 2013 at Washington DC.

The sculpture is interactive: a presence sensor starts the animation. A green laser moves along the 3D print and reads the audio speech.

This project is about printing the invisible.

It makes concrete the thoughts and speech of the president, using cutting-edge technology 3D printing.

This speech from Barack Obama (text or video) is the first to praise the 3D printing technology and FabLabs,  small-scale workshop offering personal digital fabrication. For him, they represent the future of the industry in America, the « next industrial revolution ».

His speech about 3D printing is now real and rendered as a 3D sculpture.

Help us close the loop, and présent him this work, one year day for day after the initial speech.

Selected to be exposed at the 3DPrint Show

This work has been selected to be part of the 3DPrintShow at New-York, from 13th to 15th february, www.3dprintshow.com.

The funds of the campaign will be used to ship the 3D sculpture, and logistics and setup costs.

Gilles Azzaro started the design the very next day after Obama's speech.

350 hours of 3D printing has been put into “OBAMA - Next Industrial Revolution”.

This project is possible with the connections and people from the FabLab Artilect in Toulouse, France.

The sculpture was printed with a 3D printer set-up by the artist himself. The base and cover of the work was created in partnership with the designer Patrick Sarran.

See more about the work on this page.

Here is a few of the journalists who spoke about the 3D voice sculptor, all over the world:

It's only a selection, see more on this album.

We need you to help make possible the shipping of this work from France to USA.

The shipping can only be done by a specialist company, and is very expensive.

To "see" a voice is something that has never been done before. It does push the limits, and confirms the vision and what is at stakes in Obama's speech.

To fund the shipping of the voice sculpture “OBAMA - Next Industrial Revolution” is a way to promote the value of sharing and a promote a society looking to the future : the work and the speech are strong symbols for the fans of 3D printing and members of FabLabs.

If the project is funded at more than 100%, we will also finance:

Help the France be part of the next industrial revolution by being at the 3DPrintShow!

Thank you for your support and please help us by sharing this project with your friends and family!