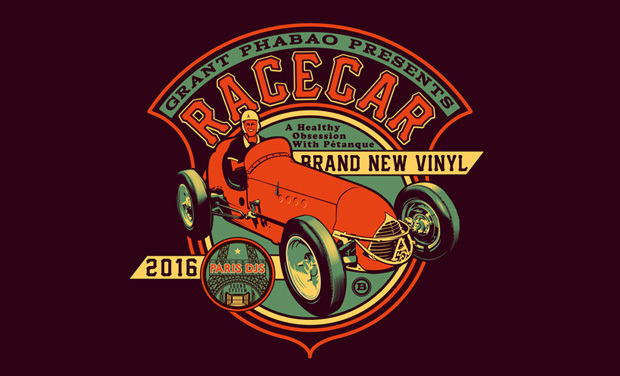 For two years now, Paris DJs has been manufacturing thanks to your support, thanks to crowdfunding, some vinyl LPs and 45s, CD boxsets, posters, t-shirts & sweatshirts, all collectable limited editions illustrated by poster artist Ben Hito, with the label traditional high-quality stamp. We've now become "serial crowdfunders" and since everyone's been asking "when is the next one?"... Well, this new campaign will last during the whole summer of 2016, as announced in the second issue of or bimonthly free magazine "Tour Operator".

It announces a new vinyl LP, of course, and new t-shirts too... but the essential is : don't forget that we exist solely through friends, word-of-mouth, social networking, and whole lot of elbow grease, so don not hesitate to share this campaign as much as you can. Tell everyone around you about it. We need you, and all your music-loving friends. Let them know.

Help Paris DJs press a CD and a vinyl LP of Grant Phabao & Racecar's album, illustrated by poster artist Ben Hito. Support our new crowdfunding campaign, find your name on the booklet (or insert for the LP), or get yourself a collector t-shirt printed. The album will be released in september 2016.

A Chicago-born MC now based in Paris, RacecaR brings his best rhymes on some surprising "rare grooves afrofunk, jazz, soul, reggae & ska produced by the unstoppable Grant Phabao. An off-road race for a boom-bap aficionado !

A1. Return Of The Dig-Fu

A4. We Do Anything feat. Taiwan MC

B1. Rock Your Boat

B2. A Beautiful Days

B4. Never Say Play Me

Chicago-born MC RacecaR started rhyming at the end of the 80s. After more than 20 years of touring and recording in the US, he moved to Paris in 2010 and started a whole new musical life. With both knockout performances and acclaimed featurings with bands & artists such as Afro Latin Vintage Orchestra, Dafuniks, Sax Machine, Soul Square, Taiwan MC; with producers and beatmakers such as Asagaya, Blanka, DJ Suspect & Doc TMK, ICBM, Lawkyz, Mattic, Son Of A Pitch; RacecaR is one of the most in-demand hip hop MCs in France. For sure we're missing a few other cool cats in that list, but you get the point : every musician who meets RacecaR over here understands very quickly how tight his flow goes, how masterfully his rhymes are delivered, and how in any kind of context he's able to fit in with style.

A hard-working abundantly talented rhymester, RacecaR has now been living a pure hip hop life for the last two decades. One of the coolest hip hop cats in the French capital, he's relentlessly touring but in a constant state of rap, writing & rehearsing whenever he can. RacecaR' open-mindedness and friendly Native Tongues attitude got him to collaborate with more and more multi-instrumentalists/producers, among which Etienne de la Sayette, on the opening track from his "Maputo Queens" album released last may, and Grant Phabao, the French label's in-house producer and sound engineer, on a handful of digital singles — all released on Paris DJs.

After pumpin' house hit singles for the Pro-Zak Trax label at the end of the 1990s, Grant Phabao grew to be a prime purveyor of Jamaican Soul, wether labeled "ska", "bluebeat", "rocksteady", "reggae", "dub" etc. After releasing albums with Jamaican legends Carlton Livingston, The Lone Ranger, The Jays or The Silvertones, and remixes for the whole planet, from George Clinton to Alice Russell, from David Byrne and Chuck D to Shawn Lee, from Jurassic 5 to Monophonics… he kept on evolving, and started producing Jazz, Funk, Soul, and African music, working with the likes of Ebo Taylor, Tony Allen, Oghene Kologbo, Antibalas, The Souljazz Orchestra, Brownout or Franck Biyong, among others.

With the Paris DJs label, he managed to cross the rigid boundaries of music categorization with an astonishing quantity of releases in many styles, while developing a high-order mastery in reggae, ska and afrofunk.

RacecaR & Grant Phabao met at Paris DJs' studio in 2014, thanks to an introduction from hip hop activist Miska with whom the French label has been doing hip hop-themed compilations. They decided to try something new together. Grant Phabao had never produced any hip hop artist before. And RacecaR had never tried to write and record on afro, funk or reggae music in the past. So they planned to produce new tunes together, and blend RacecaR's unmistakable flow with Phabao's unique take on deeply funky American, African and Jamaican grooves.

The goal of Grant Phabao and RacecaR's collaboration was not from day one to be in competition with their other projects, or to jump on the beatmaking bandwagon, but instead to explore where both of their musical worlds could meet. What if they tried recording one's hip hop rhymes over the other's reggae, ska, afro, jazz or funk productions ? Exploring some new rare grooves with rhyming and rapping, is uncharted waters in terms of tempo for a boom-bap aficionado ! indeed there's no boom bap here, no maverick beats, no wonky, no wobble — all breaks, skanks, drops and more polyrhythmics. The word was : "let's turn our worlds upside down, and make something different together".

STREAM A 5-TRACK SAMPLER FROM THE LP ON SOUNDCLOUD :

"Return Of The Dig-Fu" was the duo's first single, boldly subtitled 'Hip Hop Meets Afrofunk', it's a 'Let's play it again' versus ' I need this for my set' kind of tune. With rhymes evoking the digger's lust for the rare groove in vinyl inside all of us, this is an unstoppable afro-funk-hip-hop monster, compiled in the first Paris DJs funk/soul selection "Killas, Thrillas & Chillas".

"Champion Sound" is one long ride, full blast, featuring some storming sax riffs & solo by Saké from Les Frères Smith. Over a dancefloor-heavy pompin' ska number, RacecaR is relentless, rhyming at high velocity. Be warned, crowds will be jumping all over the place to the sound of this.

"Think It all" smoothes thing a little bit after this double explosion. On a 33% funk, 33% jazz and 33% dub instrumental, RacecaR recalls a Jurassic 5 vibe which should appeal to many fans of post-golden age grooves.

Slowing things down, "We Do Anything" is another kind of different blend, with the lyricist's groovy rhymes recorded over one of Grant Phabao's heavy one drop reggae riddims, and featuring Parisian activist from the Chinese Man label Taiwan MC on guest vocals. A true Jamaican singer in the heart, Taiwan adds a catchy hook to the tune and the resulting track is pure, burning, smokin', cookin' music.

The voyage in a sea of styles is far from over though, as RacecaR has now to face a psychedelic funk whirlwind with heavy stompin' & swingin' beats ! Borrowing its chorus from Canadian MC & friend Jeff Spec, "One Two One Two" sees our MC in great shape, delivering expertly crafted verses one after the other. It seems as if he could even confront a tropical storm now… but that's a story to be told on Paris DJs later on.

Originally recorded over a Gene dudley Group instrumental but rejected by his label, RacecaR's "A Beautiful Days", in a bubbling psychedelic funk Grant Phabao dressing, is maybe the poppiest song the man ever sung. Because sometimes we just like things catchy as hell, it's as simple as that.

"One Free" then sees the American MC laying a thick rap, moving on and around the beat, over a deep & dubby, slow & stripped-down early 80s dancehall style riddim from the French producer and multi-instrumentalist. The vibe is laidback, smokey, while tropical and hip. A pure stoner tune in the "play it again, Sam" category.

"Never Say Play Me" closes the album on a unexpected John Barry/James Bond kind of cinematic jazz vibe, with thick horn & string layers, some spacey guitar solo, a shuffling rhythm and a whole lot of suspens.

All instruments, recording, mix and mastering by Grant Phabao at Paris DJs studio

The shipping & handling costs have already been added to your contribution for France. For Europe and the rest of the World, you'l have to manually upgrade your amount. We tried to calculate them fair.

Sweatshirts are rather "slim", rather close-fitting. Choose one size over your t-shirt size for the sweatshirts. If you want a different color than black, don't hesitate to get in touch.

Paris DJs has funded entirely all the music production, from composition & recording up until mix and mastering.

- Shipping fees will be an approximate 800€

That's a total cost of 5.600€. So if everything goes according to plan, we'll have 2.100€ left to fund ourselves. Of course, the more you'll support us, the fastest we'll be able to come back with new music ! As Louis Armstrong used to say : "our music is a secret order" !

What will we do if the amount we'll raise exceeds the goal ?

Our four previous crowdfunding campaigns all over reached their goals, with the additional money we added gifts and finshing touches each time.

Hopefully this new one will go smoothly, we'll raise a whole lot more than what we need and we'll be able to add some cool goodies to all the packages of our backers. Such as for example the latest issue of the Paris DJs magazine...

Thanks for your support ! Thanks again for those who keep on coming back ! !