Help us create a workshop for young european film writers ! 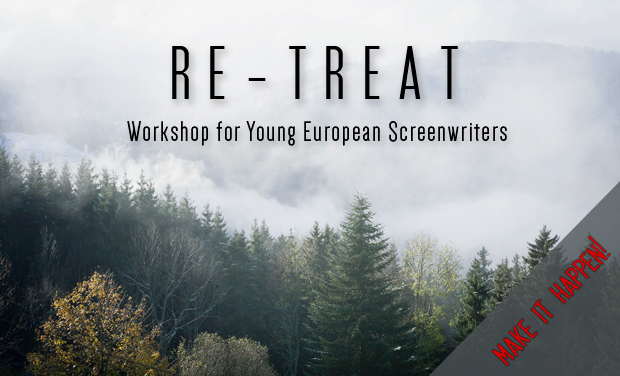 RE-TREAT is a 2-week writing workshop for 10 young european screenwriters and directors, in an isolated farm in the beautiful Vosges Mountains in France

You can compare a script to an architectural plan : if a small detail isn't at the right place, the whole structure is lame. Writing is thus the longest and most complicated part of a film production. It is a very personal process, in which an external point of view is very important though. People with experience, who can see what goes wrong and how to fix it.

Young authors are particularly vulnerable during this writing phase, and their creative doubts often go along with questions about their personal ability.

RE-TREAT thus gives the opportunity to 10 young european screenwriters & directors to put their projects (and themselves) back on track with the support of writing experts, and to enrich their experience through the exchange with other participants, from all over Europe.

A jury of experts will make the selection process, paying attention to gender equity.

RE-TREAT supports artistic creation on a european level, aimed for a youth whose voice can be very loud, thanks to the medium cinema.

It is also a way to support films which are having some difficulties to stand out against the big studio machines. Films have the power to tell stories, they convey values, a cultural identity which is unique to each country, and thus, supporting european cinema means also supporting diversity.

Supporting RE-TREAT is a way to sponsor a young european filmmaker, who will be able to progress in his work and will be forever thankful for that. A new Bergman, Fellini or Wenders might be among them ?

For any further information regarding the residence, have a look at : https://retreatinthewoods.wordpress.com/

RE-TREAT is part of this year's edition of Europe Refresh, which is taking place in the Halles de Schaerbeek from 9th to 11th October, and then at the Carreau du Temple in Paris from 30th October until 1st November, supported by KissKissBankBank.

Marie-Sophie Volkenner, German raised in the Vosges Region in France, has an international experience in film producing and script development. She is an alumni of the “Atelier Ludwigsburg-Paris” and works currently as film producer in Brussels. She created the association V.O. Project in order to organize local and international cultural projects in the Vosges region.

Valentina Calà is an Italian film enthusiast based in Brussels, where she currently works as Video Production Manager for ICF Mostra. After graduating in Cultural Management, she collected experience abroad as cultural events organizers, project managers of international artist residencies and video producers for different ONGs. She also writes about film and cultures and takes pictures and videos for different magazines.

This project can only be launched with a huge support. This is why we count on you. Thanks to your generosity, you will make it possible for us to get access to public funding from Europe and the ALCA Region in order to organize the next editions of RE-TREAT. In June 2016 we will have a progress report, testimonies, pictures, recordings of the previous workshop, etc... all of those things making our application stronger.

We need you in order to lay the first cornerstone.

7.500€ is the amount we need in order to be able to organize the first Workshop.

You can reserve the appartment of the RE-TREAT workshop during two week days or during the week-end, in November 2015 or 2016. (Appartment for 4 to 6 persons. Reservations depending upon availability). + Previous rewards