Help us to transform a new generation community leaders! 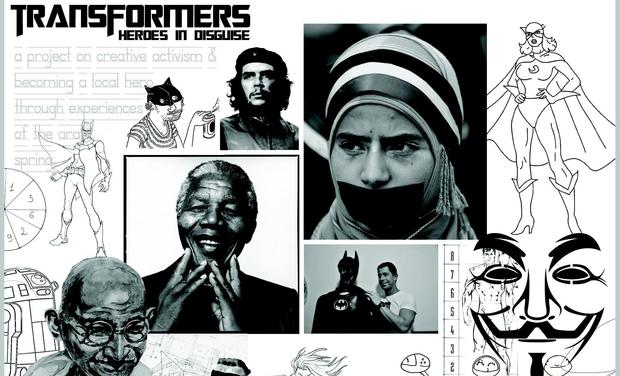 “Transformers!” is a two-week training experience from 8th till 22nd of August 2015 in which 24 young people from 6 different cities are brought together in Amsterdam. They come from Amsterdam, Paris, Rabat, Istanbul, Cairo and Berlin, are aged between 18 and 23 years old, and live in deprived neighborhoods. Inspired by the Arab spring, they will experiment with new forms of political participation and civic engagement to fight problems in their neighbourhood. They will be trained in skills of creative activism and digital communication by young experts, who have played an active role in movements like Occupy, and the Arab spring. The participants will discover their own potential to become a community leader. By imagining themselves as local super heroes, they will work on their self-esteem and discover their own special powers, but also become aware of their weaknesses and the benefits of cooperation with others. After the exchange, all participants will organize an activity in their own neighbourhood, in which they bring their newly trained skills into practice.

During the two-week training program the participants will discover their own potential to become a community organizer. They will work on their self-esteem and discover their own talents, but also become aware of their shortcomings and the benefits of cooperation with others. Within the framework of the methodology of community organizing, the participants will engage in a variety of activities. In the beginning of the training they will work on their individual competences for leadership and their team building capacities. They will focus on their own background and experiences, and will determine which issues they would like to tackle in their own neighborhood.

After this they will present and discuss their personal project plans. In a series of creative and practical workshops they will work on the skills needed to raise awareness for local problems and activate peers to find solutions. These workshops incorporate topics and activities such as internet security, public speech,community organizing, fundraising, civic journalism, story telling, theatre of the oppressed, and spoken word. After the two-week training program all participants will organize an activity in their own neighbourhood, in which they bring the skills that they have trained during the exchange program into practice. These activities will start at the same moment and will be reported on the project website. The Transformers! organizing team will provide participants with support in the process of organizing their activities. This support includes regular feedback, and further coaching in matters such as fundraising, PR, network building.

- To stimulate young people who do not feel they have access to the democratic process, to raise their voice and make themselves heard.

- To stimulate young and ambitious people from deprived neighborhoods to discover their own leadership potential and take on a community organizing role in their community.

- To provide young people from a marginalized position with skills of creative activism in order to transform the social problems they are facing, and mobilize others to do the same.

- To bring young people with a Northern African immigrant background living in Europe together with peers from Northern African countries, in order to search for their own preferred expressions of civic engagement.

- To explore the potential on local level of new forms of political participation of young people as they emerged during recent events of grassroots protest.

We live in excited times. A global economic crisis is crushing our hopes for the future. At the same time people around the world are demanding more democracy, because a better future is exactly what they hope for. The practice of politics and civic engagement is changing. People have lost their faith in the truly representative potential of political institutions. Not only the bankers have proven to be unaccountable, but also the politicians.

At the same time, new forms of protest are emerging which do no longer fit to the traditional strategies of social movements and political parties. Young people take the lead in this development. They make use of new web technologies and social media to gather people in real time and space. They no longer depend on mainstream media, but make their demand for real democratic access widely heard via their own blogs and facebook-accounts. They express their civic engagement in ways, which are often not even recognized as political. Nevertheless, they manage to mobilize millions in their quest for social and political change.

Tahrir square, Gezi Park and Puerta del Sol became iconic for the contemporary power of the people, but what may be even more promising is what is happening in countless smaller squares and parks, community centres and coffee houses, where young people are coming together to work on their own alternatives for good governance, community building, sustainability and economic prosperity.

Such initiatives give hope. At the same time, a lot of young people feel hopelessly stuck behind real or imaginary walls that prevent them from realizing their own potential. Many youngsters, often with an Islamic and immigrant background, living in Western European countries, feel discriminated and excluded. In their experience they are treated as ‘second class’ citizens, who cannot equally share in the opportunities, respect and rights, which are reserved for other, ‘first class’, citizens. They do not expect any change for the better from the world of policy and politics, but also hesitate to take matters in their own hand. Both traditional party-political participation, as well as more unconventional forms of political activism, do not seem fit to their experiences.

Often living in deprived neighborhoods, under challenging socio-economic circumstances, they miss role models in their direct environment who can show them the route to emancipation and success. They often seek confirmation in extremes, either drawn by the promise of hasty individual success by means of criminality, or drawn by the promise of belonging to a community of like-minded in fundamentalist faith.

These young people could use some inspiration in order to tear down the walls, and claim their respected place in society. The project “Transformers!” aims to offer such inspiration. Every neighborhood has its own young heroes in disguise; people who have special talents and wish to contribute those talents to the enforcement of their community; people who can bring the struggles and needs of their peers to the attention of the general public.

The “Transformers!” project aims to provide these heroes in disguise with the skills to make a difference in their own neighborhood. Heroes of transformation do not slightly reform a society in which youngsters with an immigrant background have to work twice as hard to fit in. They hope for a genuine transformation of social and political reality as a whole. This transformation starts close to home and is directed at inclusion and access to democracy in a social world, which is characterized by diversity.

LADJI REAL – SUPERVISOR FRANCE Producer, screenwriter, Film director and actor, Ladji Real always oscillates between art and activism. During his studies he travelled in the Middle-East for 2 years Back in Paris, he decided to study film. now LADJI works at promoting a consciously engaged cinema through his own production company and tries to promote new talents by providing a platform to emerging talents through the TV channel ITTA.TV (International Thinking, Talking, and Action).

After studying art education in Holland, I thought the street was a more lively place to learn about art than the museum. So I’ve been organizing activities for teenagers with Moroccan background. I moved to Berlin nine years ago and started social cultural work with children in Berlin. There, I love to support children in discovering their passions and powers which they can develop to have a more self determined life. With the founding of Schoolclash I can combine my love for art and history of past and present Berlin and the positive ‘clash’ of cultures.

Drawn to Berlin by its International population, multitude of languages and its dramatic history, Dennis Fraters came to the city in order to introduce students to what Berlin has to offer. He was born in Venlo, Holland in 1983, studied Pedagogical Sciences in Holland, and did his Masters in Cultural Sciences, in Brussels. After his studies, Dennis moved to Dijon, France where he worked with handicapped people. Consequently he speaks Dutch, English, German and French. Having always had an interest in education and culture, Dennis started up Schoolclash in 2009, as a way of giving students the opportunity to experience new cultures and languages first hand. Schoolclash is the offspring of a huge amount of passion and dedication to the passing on of inspiration and interest in history, culture and the arts. Dennis's pedagogical experience will be of great value in the supervision of the participants of the “Transformers!” project.

Salim Guennoun is a ´first generation´ participant of the Transformers! Project and is working as a fundraiser for different cultural NGO´s in Morocco (Maroc Art´Chimiste and Theatre Aquarium). He studied Cultural Mediation at the Institut Supérieur d'Art Dramatique et d'Animation Culturelle in Rabat. Salim´s experiences in fundraising, his moroccan network and his language competences (French, English, Arabic) will be of great value for the communication with the partners, but also for the organisation of the 2017 Edition.

Maarte Hagar Treep from Amsterdam is a journalist and a PR officer for cultural initiatives. She worked as an editor in chief for a multicultural platform for the Moroccon community. Recently she works as a freelance journalist and writes about diversity and social welfare.

Marike Minnema is born in Holland and studied theater & history. In 2009 she moved to Morocco to learn Moroccan and a bit more about the background of Moroccans living in holland. Four years later she maried a Moroccan man and still lives in Rabat. She works as trainer of intercultural competencies and she works on conflict mediation and liberation through the methodology of theater of the oppressed. During this training she will be the group leader of the moroccan group and work on teambuilding and theater of the oppressed. Fields of interest: Human nature, psychology, conFLict. Diversity of worldviews, theater and much more!

The Transformers! Project will take place surely from the 8th till 22nd of August 2015.

For the most part, the project will be financed by the Erasmus+-fund of the European Union and a fund of the Triodos foundation. To guarantee the quality of the workshopleaders and the supervision of the aftermath of the project, we need a extra contribution. We need the amount of 2500,- for the rent of the workshop spaces (500,-), the organisation of the final event (500,-) and the supervision of the aftermath-process (250,- per country, 1500)