I am epileptic and I've had enough of this silence. So I decided to make a film about it... 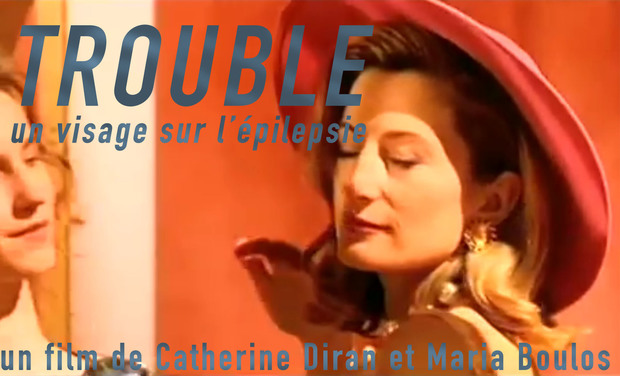 No one wants to put his face on this disease.

The singer of “Voyage en Italie”...

At the book fair.

At the parents' school meeting.

In the pubs of Paris, over a beer.

When dancing the forro in Brazil.

While walking my dog.

Every day, every minute, every moment, epilepsy is catching me up...

With TROUBLE, I simply wanted to tell the story of this duo, a girl and her disease… what  it means and how you can live with it.

For others to understand.

That it is not a shame.

There is no reason to freak out.

That you should not try to hold the tongue of someone having a seizure, no, he will not swallow it.

I was a quiet little girl ... Sometimes I would get up early, sit on the back seat of my parents' Simca without really knowing why my mum was taking me to hospital. Everything looked weird tome… the nurses rubbing my hair with a sticky product, the kind of headset I had to put on for an "electroencephalogram". On the wall in front of me, there was always the same poster, a dog, in pastel colors.

After the medical exam, my mum used to buy me tens of Mickey. I was relieved because my mother looked relieved. But I did not really understand why. I had to take some medications. A red, thick, disgusting syrup, that I couldn’t swallow and used to spit it. Sometimes I was doing weird things. I was absent. I would suddenly cross the lifts or drink out of the bottle during dinner. My mind was elsewhere.

On the carnival day, the school called my father. He brought me back home. He took me in his arms, he was worried. At that time, I still could not understand.

Then one day I understood. My new physician told me. I was epileptic. My life will be forever conditioned by this disease.

Like everyone else, I had images of epilepsy... rather vague… People on the floor, having seizures, drooling ... But then it became more and more clear.

I learned that I would probably need to have a monastic life, otherwise, I could have seizures, fall, hurt myself and even die… I learned that my days would be heavy and constraining, that I would not be allowed to drive, to become a police woman, or to party all night. That I would need to monitor the signs of a crisis, and always have in my bag a syringe to inject myself to avoid falling down. I learned that people would fear me, this uncontrolled witch-related fear.

That I would meet with some of them less and less, until one day we would not meet at all.

That my family would always worry for me... hurting myself...or even die… I also learned the shame and the guilt to be that person that disturbs, that screws-up things, that terrifies.

Once I had learned all this, I chose to live my life… fully… exactly the way I wanted…

I became a singer, a writer and a screenwriter. I chose to travel, to go out for drinks and parties. So many nights without sleeping, rehearsing, a lot of adrenaline and a lot of difficult mornings.

An almost normal life. A life that I love.

A life full of incredible moments, full of happy moments, even if those would always be under surveillance.

And it is one of these moments that I have chosen to tell ...

I arrange to meet  my mum in Valencia, in Spain, where I recently bought a flat and am struggling with the refurbishment… Intense stress but I try to let it go in the evening at the tapas bars.

I see my mother stepping out of the train and arriving in the hall of the rococo station, this same hall station where sixty years ago she arrived, not knowing she would meet her first love, and immortalized it on an old record of Besame Mucho. Twenty years after, here in Valencia, I qualified "my first love story" rather a childish story...

After some glasses of Rioja, we decided to look for  the places of those first kisses...

I watch her. As always, she is worried for me, her everlasting little girl… So I decided during this Spanish quest to be careful not to worry or frighten her, to show her that I control everything…my disease, my emotions, my life... and this

Despite my irritation when I bump into my perfect double with her perfect life, who never drinks, always comes back home before midnight without losing her shoes... Married, with three kids, a flat in Ibiza, and a blow-dry in stone!

Despite this Lebanese taxi driver, who tells me in a very bad French accent his exploits during the Lebanese war but who, as soon as I mentioned my seizures, kicks me out of his car

Despite my crisis in the nail and screw section of Bricomart where I end up in the arms of one of the guys refurbishing my kitchen.

And despite this T-shirt, supposed to capture my sleep, my mood, my heart beats, that researchers have put in place to find new trails in the management of epilepsy... but that is so hot that all my emotions are being drowned...

But above all, it is here in Valencia, the city of our first kisses, that my mum will tell me what I have always been waiting to hear …

To write and make films on our cities, our societies, our lives ... intimate films, political films, films of and about women ...

Catherine Diran and Maria Boulos are members of the collective BAD (Boulos/ Allégret / Diran), together with the writer Stéphane Allégret and the Brazilian filmmaker Julio Cesar Nogueira. BAD aims at scrutinizing  society, both on an intimate and the political level. The first film of BAD, SUTRA, filmed in Beirut, reflects a certain reality of the Lebanese woman, their relation to beauty, men, religion and war in the very complex Lebanese society. Sutra was selected at the International Film Festival of Beirut and broadcast throughout the Middle East.

HOW? (A documentary, feature)

Both a documentary and a feature, TROUBLE balances between the inside and the outside of the main character with some narrative parts. The parts with the voice-over enable to dive into the deepest feelings of the narrator but also to better understand the irony of some situations she finds herself in. The comedy sequences illustrate the social relationship the heroin is trying to maintain with her surrounding. Some sequences will be shot in super-eight technique to indicate the unreal nature of certain moments in the life of the narrator, in particular before a crisis, where the same illusory images would be turning on over and over. The tone chosen for the film is light to break with the stigmatization of the disease.

Vincent Navarro, a neurologist and researcher at the Pitié-Salpêtrière hospital and Antoine Depaulis, head of the research and development unit at the Neurosciences Institute at the University of Grenoble, will intervene at key moments to input the film with their medical and scientific expertise.

Written and directed by

Neurologist and researcher at the Pitié-Salpêtrière hospital

CEO of the start-up Bioserenity

The shooting is planned over 10 days in Valencia (Spain). The film budget is estimated around 18 000 euros. An important part comes from personal investments.

The contributions will be used for the following:

- 3000 euros :travelling tickets, accommodation and catering of the team

- 500 euros : Rent material for the shooting

What if we go beyond the primary objective (hopefully!)?

- The post-production of the film (editing, mixing, music recording).

Many thanks, your name at the end credits, a private and exclusive link to watch the film, a signed DVD of the film and an autographed CD.

Many thanks, your name at the end credits, a private and exclusive link to watch the film, a signed DVD of the film, an autographed CD and an invitation to the premiere with the crew.