Help us restock the Collège Mwanga library in Goma (DRC) after its destruction by a volcanic eruption. 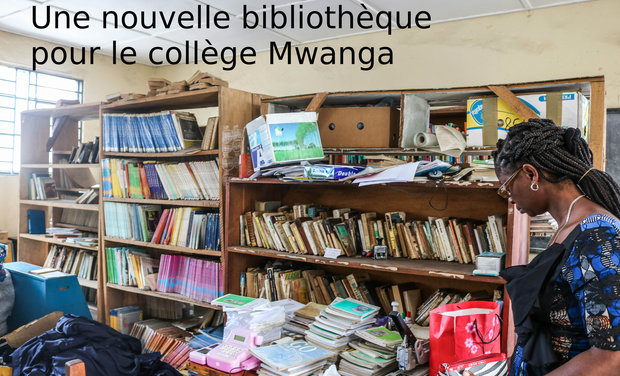 In the heart of Africa, the city of Goma is home to one million citizens and lies between Lake Kivu and Virunga volcanoes. It is also a city full of life, even though it is usually better known for the armed conflicts that have been ongoing in the region for more than 20 years.

In Goma, the cultural life is so intense that for the fifth year in a row, this is where we organize the festival. With the motto 'Singing for peace, Playing for change', this great celebration brings 35,000 people together each year.

This moment of conviviality takes place in the courtyard of the Collège Mwanga, a downtown primary school. This year, we would like to give them a little help. Teachers are trying to rebuild the school's library, which was destroyed during the volcanic eruption that engulfed part of the city in 2002.

Why is the festival working on education issues?

Supporting this school is fully in line with the festival objectives. From the beginning, our goal has been to promote lasting peace in the region. Indeed, it has suffered too much from the armed conflicts that have been hitting eastern DRC for more than 20 years. We are convinced that this will only be possible if we provide young people with the keys to build a place where everyone can live with dignity. In order to achieve this, it is essential to provide young people with quality education.

Having access to reading material and textbooks is one of the conditions for quality education. One of the Collège's current challenges is to rebuild a library after the previous one was destroyed by the volcano overlooking the city.

Education is not enough to bring peace, we know it. This condition is however essential. We are continuing, as we have been doing for the past five years, to rebuild ties between communities in the region. We are also supporting ambitious young people who want to create their own jobs, because experience has shown us that young people who have the means to live properly are not likely to join armed groups, the poison of the region. Finally, we support sustainable development in the region and we raise awareness about the often neglected environment, as the volcanoes and gorillas could attract many tourists.

The Collège Mwanga teachers need books. Money from kisskissbankers will be used to buy different books. Both textbooks that students could share and novels of all kinds in order to give children the desire to read. Here is an overview of the books we would like to provide:

-Novels (from congolese and international writers)

What if we raise more money than expected?

You never have enough books ... If we raise more money than expected, the library will grow a little more.

We also wish to provide novels to other smaller schools in the city. We are already collecting books through other channels in Belgium and in the north of France, and we would like to increase the support that we bring to them.