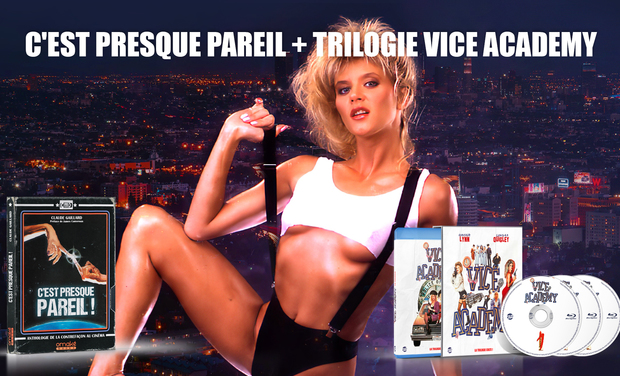 « When an idea is good, it can be used more than once !”. This could be the creed for the craftsmen of a parallel movie universe, in which every success gives birth to shameless copies, false sequels or plagiaries. Vice Academy (1989), sexy lookalike of Police Academy, was a hit on USA Network and in VHS, and even got the luxury of becoming a saga. Get the 3 first Vice Academy on blu-ray in a very limited official edition with extras, audio commentaries from director Rick Sloane and, an exclusive slipcover and limited trading cards with sexy stars Linnea Quigley, Ginger Lynn Allen et Elisabeth Kaitan. Very special price for this campaign only, and we ship worldwide !

While writing his new book (in French) C’est presque pareil !, which you could translate by “It’s almost the same !”, Claude Gaillard explored the galaxy of the films made to benefit from Hollywood successes : exotic copies, lying duplicates, wannabee sequels and every kind of cinematographic scams, yet quite attaching. Claude also came back from this journey with its love for Vice Academy strengthened. We are hence very happy to propose to you the trilogy Vice Academy Part 1, 2 and 3 on blu-ray, in a very limited triple-disc edition, with a slipcover reprising the original poster of the first Vice Academy, and limited trading cards dedicated to the 3 exploitation stars of the saga, Linnea Quigley, Ginger Lynn Allen et Elisabeth Kaitan (Vice Academy Part 3).

Here are the features for official this 3-disc edition Zone All, designed for french-speaking fans, but not limited to them, with the help and collaboration of our firends at Vinegar Syndrome :

If you read French, you could also get Claude Gaillard’s book C'est presque pareil ! together with the Vice Academy trilogy, at the special price of 50€ with additional 5€ fort international delivery.

You could also get our two first post-apocalyptic releases, Hands of steel a.k.a Atomic Cyborg (1987) directed by Sergio Martino, and Exterminators of the Year 3000 (1983) directed by Giuliano Carmineo, in blu-ray/DVD combo, Zone All.

The Vice Academy Trilogy will be shipped at the end of October.

We need you to preorder your Vice Academy Trilogy to finance :